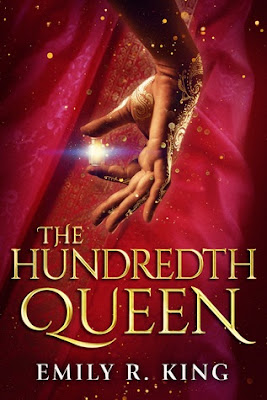 He wanted a warrior queen. He got a revolutionary.

As an orphan ward of the Sisterhood, eighteen-year-old Kalinda is destined for nothing more than a life of seclusion and prayer. Plagued by fevers, she’s an unlikely candidate for even a servant’s position, let alone a courtesan or wife. Her sole dream is to continue living in peace in the Sisterhood’s mountain temple.

But a visit from the tyrant Rajah Tarek disrupts Kalinda’s life. Within hours, she is ripped from the comfort of her home, set on a desert trek, and ordered to fight for her place among the rajah’s ninety-nine wives and numerous courtesans. Her only solace comes in the company of her guard, the stoic but kind Captain Deven Naik.

Faced with the danger of a tournament to the death—and her growing affection for Deven—Kalinda has only one hope for escape, and it lies in an arcane, forbidden power buried within her.

Perfect for fans of The Wrath and the Dawn and Rebel Sands, Emily R. King’s debut novel The Hundredth Queen is a deeply compelling fantasy story set in a harsh desert land and interwoven with  rich magic, thrilling danger and forbidden love.

Eighteen year old orphan Kalinda has lived her life in the seclusion of the Sisterhood, her days spent in prayer or training. Plagued by fevers her whole life and known for her sickly childhood, Kalinda does not expect herself to be claimed as even a servant, let alone a wife or courtesan. So when the tyrannical leader of the kingdom Rajah Tarak chooses her to be his hundredth bride, Kalinda is shocked. Though her skills with a slingshot are adequate, she is far from the warrior Rajah Tarak believes her to be. Kalinda soon finds herself ripped from her home and journeying to the palace where she is expected to fight for her place amongst the other ninety-nine wives and courtesans. Kalinda has fire in her soul and determination in her belly, but even as she wants to live, a life by Rajah Tarak’s side is not what she desires, especially as she battles her growing fascination with her guard, the kind and capable Captain Deven Narik. The palace hides startling secrets and only by learning the truth about both them and herself does Kalinda have any chance of making it out alive.

The Hundredth Queen is a daring and fascinating fantasy read steeped in Middle Eastern-style traditions and heritages. Weaving luscious desert settings together with imperative elements, abilities and aspects of romance, Emily R. King has created an addictive and high stakes story. Readers are sure to find themselves engrossed in Kalinda’s journey and adventure as she comes to learn who she is and fights for her survival and happiness.

Fantastically paced, The Hundredth Queen is highly entertaining and has all the elements of this kind of fantasy tale I adore. King does a wonderful job setting the stage and creating the setting; from the harsh, formable desert to the dirty and clustered villages and opulent palace. It was right out of history, given a magical twist with fire, earth, water and air elements explored through the Bhutas, a race of people who can control these elements and who are both the hunted and the hunter during The Hundredth Queen.

There's a real mix of cultures and cultural aspects in The Hundredth Queen. I feel like Emily R. King took different elements of various mythologies and Middle Eastern and Indian heritages and twisted them together as she brought her world to life. It gave it that Moroccan/Oriental feel with a twist. King also explored the well known ancient treatment of women as being something to be owned in The Hundredth Queen, an obstacle heroine Kalinda continues to fight to overcome.

I enjoyed seeing Kalinda’s quiet fight against those who would use her as they will and her determination to protect those she loves. Though she is not the strongest, bravest or most beautiful across the land, Kalinda encompassed everything I look for in a great heroine and I applauded her fire—no pun intended. Emily R. King wrote her very well and I can only imagine the growth she is sure to undertake as the series progresses.

There are many characters and individuals Kalinda meets throughout the story. The large array of characters and names is confusing at first, but there were a few who stand out for their personalities and purpose within the story including Deven as the love interest and Kalinda’s source of comfort and friendship as well as Brac, Jaya and Natesa. I hope to see many of these characters in future stories and hope to see the take on greater roles especially Brac who was highly entertaining to witness. Oh, and more romance please, possibly for Natesa who deserves some happiness of her own.

Very satisfying, The Hundredth Queen by Emily R. King is a fantastic debut and offers readers a glimpse into a danger ridden fantasy world set in an alluring desert kingdom. I’ve very much keen to see what happens next and will be looking to jump straight into the sequel The Fire Queen. I definitely recommend this one!