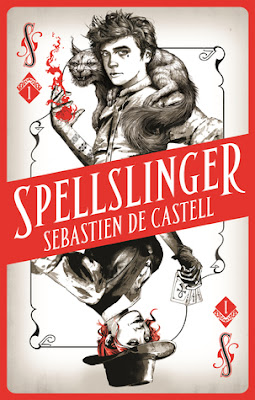 There are three things that earn you a man’s name among the Jan’Tep. The first is to demonstrate the strength to defend your family. The second is to prove you can perform the high magic that defines our people. The third is simply to reach the age of sixteen. I was a few weeks shy of my birthday when I learned that I wouldn’t be doing any of those things.

Magic is a con game.

Kellen is moments away from facing his first mage's duel and the start of four trials that will make him a spellcaster. There's just one problem: his magic is gone. As his sixteenth birthday approaches, Kellen falls back on his cunning in a bid to avoid total disgrace. But when a daring stranger arrives in town, she challenges Kellen to take a different path. Ferius Parfax is one of the mysterious Argosi - a traveller who lives by her wits and the three decks of cards she carries. She's difficult and unpredictable, but she may be Kellen's only hope...

Spellslinger by Sebastien de Castell is a rich and magic infused tale that is perfect for fans of Rick Riordan and those who love their YA reads full of excitement, humour and character chemistry.

For the Jan’Tep people, a person’s value can be defined by two things; the strength of his family and the strength of his magic. Fifteen year old Kellan belongs to one of the most powerful family of mages. Too bad that Kellen himself struggles with even the simplest of spells and doesn’t seem to be very magically inclined. As he participates in the trials every young mage must complete before they turn sixteen, Kellen fears the day is coming when he will be deemed incapable of performing magic and be forced to take a position of servitude as those without magic are expected to. Then a strange woman saves Kellen’s life during a duel gone wrong and offers him for the first time a different way of life where he can rely on his wits and cleverness instead of magic. Facing the opportunity to forge a different path than the one chosen for him, Kellen must choose between the life he’s always known and the one now before him. When a dangerous new enemy emerges determined to destroy the Jan’Tep, will Kellen stand by his people, or venture out on his own?

Heading into Spellslinger I wasn’t completely sure what to expect. The description doesn’t give too much away, but as I quickly discovered, Spellslinger is a highly addictive story. Sebastien de Castell weaves together a magical world that features a society that has an almost archaic aura to it with intriguing elements and ideology. Spellslinger reads really well. The writing is sharp and precise and the storyline builds in excitement as de Castell details Kellen’s journey.

Main character Kellen’s voice is easy to follow and he comes across as a genuine kid who is just trying to do the right thing and find his place in the world. Sebastien de Castell includes a lot of intelligent and humourful dialogue between the characters, especially Ferius Parfax and Reichris who were absolutely brilliant. I mean, three words; talking squirrel cat! Mind you, Reichris is more what I imagine a flying fox would be in this fictional world, but boy does he have a lot of personality and spunk—a fantastic personality!

Reminiscent of novels by Rick Riordan (who I consider one of my favourite authors!) the style of writing Sebastien de Castell implores and the storyline of Spellslinger is really enjoyable. There’s so much I want to know about the world and Kellen himself and I am expecting big things as this series progresses. Can’t wait to begin the next one!