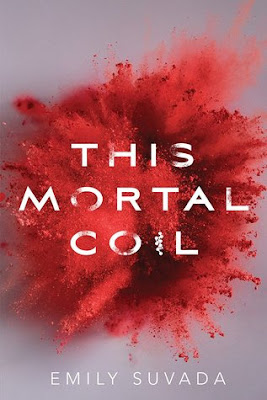 Catarina Agatta is a hacker. She can cripple mainframes and crash through firewalls, but that’s not what makes her special. In Cat’s world, people are implanted with technology to recode their DNA, allowing them to change their bodies in any way they want. And Cat happens to be a gene-hacking genius.

That’s no surprise, since Cat’s father is Dr. Lachlan Agatta, a legendary geneticist who may be the last hope for defeating a plague that has brought humanity to the brink of extinction. But during the outbreak, Lachlan was kidnapped by a shadowy organization called Cartaxus, leaving Cat to survive the last two years on her own.

When a Cartaxus soldier, Cole, arrives with news that her father has been killed, Cat’s instincts tell her it’s just another Cartaxus lie. But Cole also brings a message: before Lachlan died, he managed to create a vaccine, and Cole needs Cat’s help to release it and save the human race.

Now Cat must decide who she can trust: The soldier with secrets of his own? The father who made her promise to hide from Cartaxus at all costs? In a world where nature itself can be rewritten, how much can she even trust herself?

This Mortal Coil is Emily Suvada’s debut novel and is a rich science based thriller that intermingles elements of sci-fi, dystopia and action into a fast faced, mysterious and engaging read.

Catarina Agatta is the daughter of legendary geneticist Dr Lachlan Agatta, the man who may be humanity’s last hope against a deadly virus that has crippled the population. In a world where everyone is implanted with technology that allows people to change their bodies any way they like, the majority of society survive in airtight underground bunkers, while Cat lives above ground; alone in a deserted cabin and fighting to stay alive and away from the infected. During the beginning of the outbreak, Dr Agatta was kidnapped by a shady company called Cartaxus and ever since, genius hacker Cat has managed to remain off their radar, just like her father wanted. Until the day a Cartaxus soldier comes baring the news that Cat’s father has died and she is now the only hope humanity has of a vaccine being made. Cole is a typical Cartaxus solider, encompassing everything her father told her not to trust about the organisation, but when it becomes clear there are more dangers out there than just the plague, will Catarina be able to survive the secrets she discovers? Or will learning the truth get her killed?

This Mortal Coil is a fast paced and highly detailed novel from Emily Suvada that offers readers a fresh twist on the age old zombie apocalyptic tale. Focusing heavily on the technology based themes of this futuristic society, Suvada has created a world in the middle of a catastrophe where codes and apps are a key element of everyday life and can act as everything from medicine and medicinal treatments to upgrades and alterations to an individual’s DNA and genetic makeup. It made for fascinating reading.

The main character in This Mortal Coil is Catarina. I did like her as the heroine; she was capable and resilient—clearly able to survive in extreme conditions, if her existence alone for so long was any indication. She was intelligent and willing for fight for herself and the right thing. I liked that as well as the relationships she had with those around her.

My only issue with this book is that there’s a twist towards the end of the story that I’m not sure was really necessarily if I’m being honest. I don’t want to give away any spoilers, but with the way in which the story was progressing and the relationships developing, the revelation seemed a little bit like a setback to the characters growth. I’m not saying it was the worst twist I’ve ever seen, but I feel like Suvada could have left it out of the story and all still would have been right with the world.

There are plenty of twists and revelations with this story and with Emily Suvada concluding this tale with a few key heart pounding chapters, I’m keen to see what happens next. I’m still eager to learn what happened to some of the characters including Agnes and Dax and will be hoping for a sequel so I can discover all the secrets we’re still left to uncover.

Source: Sent for review by publisher via Netgalley (Thank you guys!)
Publisher: Simon Pulse
Format: Kindle ebook via Netgalley
Release Date: November 7th 2017
Purchase: Bookworld | Booktopia | The Book Depository | Amazon
Final Thoughts: I did quite like this book and I'll definitely be keeping my eyes open for a sequel.