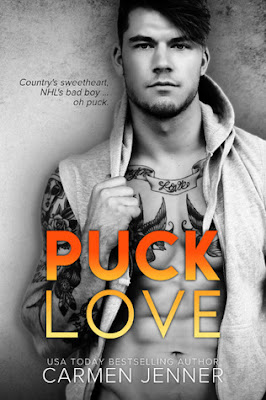 Stella Hart is the hottest thing in country music. For ten years, she’s been Nashville’s darling. She’s pure, sweet, and a positive role model in an industry rife with scandals, sex, and sequins. Men want to own her, women want to be her—everyone wants a piece of her, and Stella? Well, she wants out.

As the center for the Calgary Crushers, Van Ross isn’t afraid of the spotlight, but he doesn’t much like it either. Despite his reputation as a player, the NHL’s bad boy lives for only two things: the game, and his younger brother. That’s why when he comes across a country music superstar seeking refuge at his home in the Canadian Rockies, he’s not too happy with the media sh*tstorm this surprise houseguest brings.

With chemistry like theirs, tension runs high on and off the ice, but the end game is the same for both players: line up the puck, take the shot, and score. If only their hearts understood the play.

Puck Love is Carmen Jenner’s latest release and is a fun and sexy read that is brimming with laughable moments, electric chemistry and sizzling romance.

Stella Hart is country music’s darling. For ten years she’s been known for her wholesome and innocent nature. Yet Stella isn’t as sweet and pure as everyone believes her to be and though she performs in front of sold out concerts and leagues of fans all the time, Stella desperately wants an out. When she has a panic attack before a concert in Calgary, Stella flees, stealing a car and soon finds herself stranded on an icy mountainside. Van Ross is one of Canada’s star hockey players. Men want to be him and women want to be with him. Featuring a reputation for being a player, Van’s got girls falling all over themselves trying to win him over, but the one place he knows he can keep to himself is his lodge in the Canadian Rockies. This place alone is a sanctuary for Van, until he and his brother come across a half frozen, drunk-as-a-skunk country singer on the side of the road. Unable to leave her to freeze, Van brings his reluctant houseguest home to try and avoid the media frenzy that her discovery would bring. Away from the pressure and the circus public life brings, both Stella and Van can’t deny the attraction that simmers between them, but with their opposing careers sure to keep them apart, will Van be able to convince America’s sweetheart that he’s authentic in his feelings? Or will they both lose their shot at love?

I really do enjoy Carmen Jenner’s novels and Puck Love is no exception! Set in a quaint but vivid Canadian setting, Puck Love unfolds through the eyes of both Stella and Van who are likable characters and who bring such personality to this wonderful story. Puck Love features plenty of delectable sex scenes but also includes a lot of witty banter and chemistry to the story as hero and heroine fall for one another.

Puck Love is a very fun read and is something you’ll definitely devour quickly. I loved the great cast of characters Jenner has introduced us to including not only Stella and Van but Van’s brother Emmett, his wisecracking best friend Eli and Stella’s ballbreaking manager Lara—they all brought such flair to the story. And I have to give props to Carmen Jenner for including a character like Emmett; someone who doesn’t let his disabilities limit him and who the author goes above and beyond to prove is just like everyone else.

A NA novel wouldn’t be NA without a lot of tension and drama, something Jenner weaves perfectly into the story. I genuinely enjoyed getting to know Stella and Van and was intrigued by the world they occupied. I’m crossing my fingers Carmen Jenner may consider writing a companion novel in the future featuring Eli and Lara as they had a delicious tension and I’d love to see more of them in the future.

Fun and flirty, Puck Love is an entertaining and athletic romance read that will definitely appeals to those who love their romance tales with spark and flair. I definitely recommend!