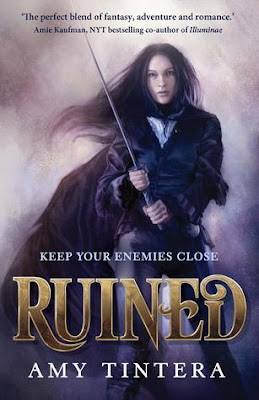 Emelina Flores has nothing. Her home in Ruina has been ravaged by war; her parents were killed and her sister was kidnapped. Even though Em is only a useless Ruined - completely lacking any magic - she is determined to get revenge.

Her plan is simple: She will infiltrate the enemy's kingdom, posing as the crown prince's betrothed. She will lead an ambush. She will kill the king and everyone he holds dear, including his son.

The closer Em gets to the prince, though, the more she questions her mission. Her rage-filled heart begins to soften. But with her life - and her family - on the line, love could be Em's deadliest mistake.

Ruined is Amy Tintera’s latest release and is a superbly written fantasy tale packed with action, adventure and romance that will no doubt appeal to fans of The Winner's Kiss by Marie Rutkoski and Throne of Glass by Sarah J. Maas!

Emelina Flores is a member of the Ruined, a race of people known for their incredible abilities, who are hunted and executed by the ruling Kingdom of Lera. Em’s home has been ravaged by war; her parents dead and her sister a prisoner of Lera’s King. With nothing to lose, Em infiltrates the enemy’s kingdom, posing as the crown prince’s betrothed in order to find her sister and enact revenge. Planning to kill the king and destroy the royal family, Em isn’t prepared to discover that prince Cas is nothing like his father. Kind and genuine, falling for Cas could change everything if Em allows it, but with lives on the line and attack around the corner, will Em be able to go through with her mission, or will her heart lead her astray…..

Ruined truly was a well-paced, well written and incredibly well detailed fantasy tale! As someone who has adored Amy Tintera’s work in the past, I can honestly say she did not disappoint with this latest release and had me thoroughly entertained with Ruined. Ruined unfolds through Em and Cas’s varying POV’s and allows us into the minds of two very different characters who are on opposite sides of the divide.

I honestly liked the two main characters Amy Tintera featured in Ruined. Em was a strong, capable female lead who knew what she wanted and was willing to fight for her people. In the beginning of the story Em comes across as really hard; she’s determined to make the royal family of Lera pay and doesn’t flinch in taking lives, but as Ruined progresses, Cas seems to bring out something in her—a softer side that allows her to see things aren’t completely black and white and there is hope.

Cas on the other hand is simply an honest and genuinely good guy. He’s somewhat naïve to the goings on within the kingdom and it’s not until he meets Em that he begins to pay real attention to how the Ruined are treated and what his father does to them. Cas could be a really wonderful leader if he has the chance; someone who could instil new practices within the kingdom.

Cas and Em meet when she poses as his intended to gain entry into the palace. Marrying Cas may open a lot of doors for Em, but over time it also makes her question a lot of things. Em and Cas’s relationship was really sweet and endearing to read about. Tintera builds on the tension between them the closer they get and it was really entrancing seeing them slowly fall for one another. It may not have been the plan, but there’s no doubt that Cas brings out the best in Em and theirs was a romance I really enjoyed seeing the beginning of---I can only hope how strong Amy Tintera will develop them in future books!

Depicting a fantasy world where different kingdoms and lands are at war with one another, I’m especially intrigued by the Ruined people. There were a few supporting characters we met that I liked and would like to know more about, but I don’t feel we truly know the world within the story yet.

Concluding on a killer ending, Ruined sets the stage for the second book in this series, Avenged, and leaves me dying to see what will happen to Em and Cas next! Fast paced, wonderfully written and deliciously romantic, Ruined was a solid fantasy read that leaves me excited to see what Amy Tintera does with the series next!

Source: Sent for review by publisher (Thank you guys!)
Publisher: Bloomsbury
Format: Paperback
Australian RRP: $16.99
Release Date: 27th April 2016
Purchase: Bookworld | Booktopia | The Book Depository | Amazon
Final Thoughts: Though our Australian cover doesn't do much for me, Ruined is a BRILLIANT book and I cannot wait for the next one!