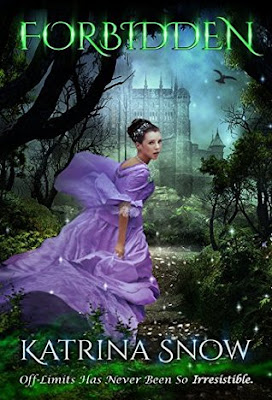 Lady Katherine Durant has perfected the art of hiding her Gifts—a valuable skill in a land where any hint of sorcery could lead to the burning stake. But, hiding her Gifts isn’t the same as not using them, and that troublesome difference has led to capture each time she’s run from her uncle.

Now, using a newly-discovered spell, she binds her powers and flees again—this time for her life. Unfortunately, her plan to hide as a maid in a distant kingdom goes awry when she unwittingly gets entered into a festival competition for the hand of a prince—a man with a wicked kiss and a sense of adventure that rivals her own.

All she’s ever hoped for is a quiet existence as a servant, never imagining she could find laughter and belonging and love. And now the mischievous prince has her dreaming of all those things.

With a bounty on her head, sorcerers closing in, and a prince threatening to steal her heart, could it finally be time to stop running? Time to trust? Time to love?

Katrina Snow’s debut novel Forbidden is a simply brilliant fantasy tale that is addictive with its delectable dialogue, page-sizzling chemistry and romance to die for! One of the best books I’ve read this year!

Lady Katherine Durant has been under her Uncle’s control since her parents both tragically died and she became his ward. Both blessed, and cursed, with unimaginable powers, Kate has mastered the ability to keep her Gifts hidden in a world where sorcery is forbidden and punishable by death. When her Uncle gives her to another man who in turn binds her to him, Kate flees, desperately seeking out her cousin and joining her on a journey across the land so her cousin can participate in contest to win the hand of a prince. Attempting to hide in plain sight as a maid, Kate isn’t prepared to find herself thrust in the spotlight when she herself in entered into the contest. Going barb for barb against an intelligent and daring prince who makes her burn, Kate must try to protect her heart as she continues to discover that maybe running is no longer the answer; especially when she might have found something worth fighting for….love.

Having recently devoured Forbidden, I have no qualms in saying that this book is one of the best I’ve read all year, easily keeping me up until all hours of the morning—something that doesn’t happen very often. Considering I was unsure what to expect heading into the story, Snow absolutely blew me away and sucked me in with Kate and Bregovi’s sensational chemistry and sharp, witty banter. Their’s was some of the best chemistry I have read in a novel in a long time, if ever and I ate up every shared moment, touch, kiss and sentence shared between them.

Katrina Snow has simply outdone herself with the chemistry and connection she has written into the story between Kate and Bregovi. This alone could have easily made me adore the story with so much wit and sizzle written into their developing relationship. I loved the push and pull, the determination Bregovi had to be with Kate—it made me swoon. Yet, at its base Forbidden also features a very vivid storyline that weaves all the best elements of fantasy combined. Magic, sorcery, romance, humour, friendship, family…everything blends together with fire, flair and sensational dialogue that is pretty much perfect.

Even the characters I couldn’t fault, especially the leads. Kate was a sensational heroine to follow; strong willed, intelligent and vocal—refusing to bend for anyone. She had fire inside her and personality and I loved that Snow wrote her so likable. You were one hundred percent behind Kate all the way. Bregovi was charming and dashing, and really, really sexy. He was cheeky and adventurous and adored his sister Rachel too, something that won points with me.

Forbidden was well written; Katrina Snow’s writing painting a lovely fantasy world that unfolds through alternating POV’s between Kate and Bregovi and a few minor characters too. I loved the cast of characters Snow littered Forbidden with. Bregovi’s sister Rachel was a true sweetheart, as was her love interest who was simply perfect for her. Bregovi’s friend Wolfe intrigues me with his cheeky personality, as does Kate’s cousin Victoria who seemed to go back and forth between helpful and kind, and well….not.

I’m highly intrigued by the world of sorcery and genies Snow has created. Underneath Kate’s plight, there seems to be another sub-story brewing that makes me excited for possibilities with future books and the chance to follow other characters in future tales, some of which I’ve mentioned.

Deeply delicious, I cannot praise Forbidden enough! Katrina Snow has seriously impressed me with her debut and I cannot wait to see what she has in store next with the second novel, Fractured. If it’s anything like Forbidden I have no doubt it’ll be brilliant!

Source: Sent for review by publisher via Netgalley (Thank you guys!)
Publisher: Published by KL Anderson
Format: Kindle copy via Netgalley
Release Date: November 5th 2015
Purchase:  Amazon | Barnes & Noble
Final Thoughts: This book is simply BRIILIANT! It's one of those fantasy tales you won't want to put down and I can't recommend it highly enough!