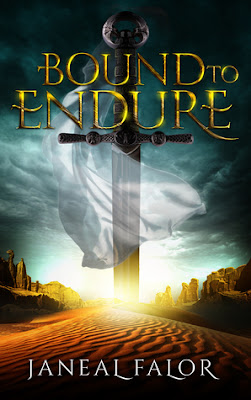 After narrowly escaping marauding pirates, Arabella has returned to safety and is ready to go through with her arranged marriage.

The human Prince Phillip isn't who she wants to wed, but he was chosen by her parents to unite the elven and human realms. Arabella has fought her way through too many death threats and attacks to give up on this important goal, although the pirate Captain Smythe remains set on keeping the two countries enemies.

With the odds and her own heart against her, Arabella must overcome forces beyond her control if she's to forge peace between the kingdoms.


Bound to Endure is the second novel in Janeal Falor’s Elven Princess series and is a grand follow-up to the first novel that entranced me with its action, adventure and romance.

Picking up exactly where there first novel left off, Bound to Endure continues to follow elven princess Arabella who has just discovered the identity of her betrothed but whose wedding is thrown into chaos when pirates attack and Arabella and her servant Jocelyn are kidnapped. Taken aboard a ship, Arabella  and Jocelyn see their chance after a week at sea and manage to escape, seeking refuge in a human town and beginning their journey home. Though she longs to be with Robert, Arabella is determined to unite the elves and humans, however there are still people determined to thwart Arabella’s marriage to the human prince with disastrous consequences.

After the shocking conclusion to Bound by Birthright, Janeal Falor practically became my best friend by allowing me to read the next novel straight away; before its release. Bound to Endure follows on with Arabella at the altar, having just learnt the identity of her groom, before her wedding to the human prince is interrupted by none other than Captain Smythe. What follows is another fast paced and exciting adventure that sees Falor continue to tell Arabella’s tale and develop her storyline.

I continue to adore all the characters, with Arabella continuing to remain a strong leading lady. Determined to do right by her people, Araballa constantly tries to convince herself of the benefits of marrying her betrothed, even though her heart yearns for another; a man who ignites desire and passion in her and who she wishes she could be with. Arabella has fire in her that I like and I appreciate that even as a princess she’s still the first one to grab a sword and defend herself and those she loves.

Bound to Endure sees Falor explore a bit more of Arabella’s kingdom and that of the human’s, with Jocelyn and Arabella attempting to return home. There’s a lot of emotion in this book as Arabella experiences some heartbreaking loss and the lives of the characters we love never completely safe. Old enemies and new appear and continue to threaten the fragile peace between the elf and human lands.

Janeal Falor will keep you guessing as to what will happen next, even as you as the reader yearn for Arabella to finally get her man and defeat the foes that continue to threaten all she holds dear. And with another startling and unexpected ending, I’ll be looking to start the third and finally book in the trilogy, Bound by Love as soon as I’m physically able! Brilliant!

Source: Sent for review by the author (Thank you so much Janeal!)
Publisher: Chardonian Press
Format: Kindle ebook
Release Date: June 27th 2016
Purchase:  The Book Depository | Amazon | Barnes & Noble | Kobo
Final Thoughts: A fantastic sequel that complimented the first book. I can't wait to read the next one!