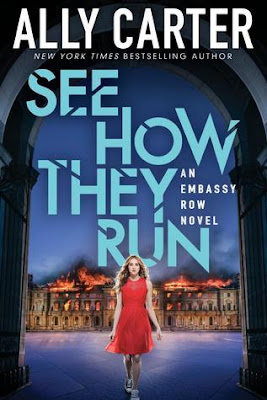 Inside every secret, there's a world of trouble. Get ready for the second book in this new series of global proportions--from master of intrigue, New York Times bestselling author Ally Carter.

Grace's past has come back to hunt her . . . and if she doesn't stop it, Grace isn't the only one who will get hurt. Because on Embassy Row, the countries of the world stand like dominoes, and one wrong move can make them all fall down.

The twists get twistier and the turns get even more shocking in the second thrilling installment of Embassy Row.

See How They Run is the second novel in Ally Carter’s Embassy Row series and continues on with all the mystery, intrigue and secrets so prominent in the first book with our heroine learning even more shocking truths…..

In the first book, All Fall Down, Grace Blakely learnt some startling secrets about the truth behind her mother’s death and what really happened that fateful day. Now in See How They Run, Grace is struggling to reconcile her involvement with what she now knows happened. In the midst of finding her feet, an unexpected murder occurs and someone Grace loves is suspected of being the murderer. Fighting to prove their innocence, conspiracies begin to come to light and it soon becomes clear that no one is safe, especially Grace, and wanting the truth to come out may just put her in even more danger than ever.

You know what? I really enjoyed See How They Run. It was a worthy follow up to the first book that touched on what previously happened and continued on with an intriguing storyline; evolving previously introduced concepts and introducing brand new mysteries. Embassy Row sure is a dangerous place to live and Ally Carter manages to have her characters situated in the very heart of it. All Fall Down was a steady paced novel for me, while See How They Run seemed to move swifter and at a faster paced. I definitely enjoyed this book more than the first.

Grace is an interesting main character to follow. At sixteen she’s still relatively young and does read like a normal teenager. Yet Grace is also a very fractured individual and her mental stability often comes into focus; especially where those who know her becomes concerned. There’s a lot of guilt there in Grace over her role in her mother’s death and I commend Carter for writing this so—Grace has a lot to come to terms with and she’s only taking baby steps at times and everything continues to fall apart around her.

By Grace’s side during the story and her attempts to discover answers are her friends Noah, Megan, Rosie and Alexei, as well as her older brother Jamie who pays her a visit at Embassy Row and Noah’s twin Lila who becomes an unexpected ally. Personally I like all the characters and feel they fit the story well. Grace continues to care for Alexei and he obviously cares for her deeply if his actions in this instalment are anything to go by. I’m looking forward to seeing them take the next step in their relationship—I feel like it could happen at any moment.

Ally Carter sure packs a lot into the last couple of chapters. There’s danger, excitement and some very unexpected revelations. The life of someone Grace loves is left on the line at the end of this book and See How They Run concludes at a powerful moment.

A worthy follow up to its predecessor, See How They Run sets the stage for the next novel and all future ones to follow and Ally Carter leaves me highly intrigued to discover what will happen to Grace next!

Source: Sent for review by Scholastic Australia (Thank you guys!)
Format: Hardback
Buy it: Bookworld | The Nile | The Book Depository | Amazon
My Recommendation: If you enjoy contemporary mystery and intrigue, this is the series for you?
Cover: I do actually like this cover--it fits the story and goes well with first book's cover.
Will I read sequel/continue with series: Yes. I want to know what happens next!