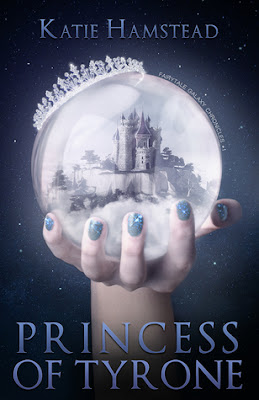 Apolline is happy hunting magical creatures on her pirate infested outer-perimeter planet. She is a fantastic shot, and doesn’t flinch at the blood and guts of her kills. Never once did she consider she could be the missing Princess of Tyrone.

All her life, she has heard the story of the Princess, cursed to sleep for eternity, unless her betrothed, the Prince of Oran, gave her true love’s kiss. Although Apolline knows she is betrothed, she thinks her fairy guardians arranged it out of ignorance of human ways. The thought she could be a princess is inconceivable.

Then Allard appears. Handsome, charming—but he’s not hers to have. He’s betrothed, too. Her guardians warn her against her new found friendship, but she and Allard meet in secret anyway. Despite her rough exterior, he sees beyond her gun-slinging bravado, and their love blossoms.

But the deadline for the sleeping curse is approaching. If Apolline falls in love with the wrong person, she could end up sleeping forever.

A quirky, adventurous retelling of Sleeping Beauty, with a less than princess-ly princess!

Princess of Tyrone by Katie Hamstead is a delightful retelling of the fairytale classic Sleeping Beauty and is perfect for fans of Marissa Meyer and those who love a well told fairytale!

Apolline has lived her whole life on the planet of Mish, happily hunting in the forest and living with her three fairy guardians. Believing herself to be an orphan, there’s no way she ever considered she might be the missing princess of Tyrone, kept in hiding lest an evil sorceress force her to sleep for eternity due to a long ago placed curse, unless her betrothed, the Prince of Oran can wake her with true love’s kiss. Apolline knows she’s betrothed and that’s never been an issue….until she meets Allard. Handsome, intelligent and charming, Allard is betrothed too, but neither can fight the pull they feel for each other, and as their friendship grows and develops into something deeper, both Apolline and Allard are in for some unexpected surprises as danger arises and they must fight for all they love…..

My goodness was Princess of Tyrone a thrilling tale! Honestly, I just devoured it. Told through both Apolline and Allard’s POV’s, Princess of Tyrone was fun, adventurous and romantic; a brilliant reciting of Sleeping Beauty with a sci-fi twist. There’s pirates and ogres and magic galore as Katie Hamstead draws readers into a sweeping tale of romance, butt kicking heroines and a beautiful and addictive romance.

Apolline was a really fierce heroine to follow. She was as far from a typical princess as you could get and was the first one to jump into the fray; fighting, shooting and taking things down. With her huntress background, a gun in her holster and an often disheveled appearance, Apolline was a character you found yourself cheering for. She was sweet, but sassy and I loved her attitude. I couldn’t fault her as a main character—especially in a fairytale retelling. Apolline managed to be very strong in character and kick-ass as a heroine.

As Apolline’s love interest and leading man, Allard was a worthy match for Apolline. Sure he was charming and handsome, but he was also kind and honest and genuine. Allard was a good guy and someone swoon worthy. If I had to pick a fairytale prince; Allard is definitely someone I’d choose—he was just everything I could have wanted.

Now, I don’t want to give too much away, but Apolline and Allard were such a fabulous couple and I really enjoyed their romance. Hamstead writes their building friendship and budding romance in such a way, you actually feel the chemistry and the tension between them. Stolen glances and soft caresses keep their feelings growing and they manage to bring out the best in each other; as well as a smile to this readers face.

Source: Sent for review by YA Bound Book Tours and the author (Thank you ladies!)
Format: Kindle ebook
Buy it: Amazon
My Recommendation: If you enjoyed The Lunar Chronicles by Marissa Meyer you'll love this!
Cover: This cover is absolutely beautiful and I love it.
Will I read sequel/continue with series: Yes. Cant wait for more!