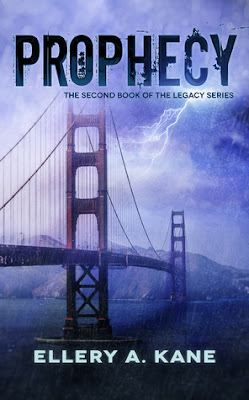 Over a year has passed since Lex Knightley journeyed alone into desolate San Francisco. The Guardian Force is disbanded, emotion-altering drugs banned, and citizens allowed to return to the seemingly resurrected city.

For Lex, life is almost normal, but normal is precarious. Normal has a way of falling apart.

One rainy night changes everything. Out on parole, Quin McAllister’s father is arrested for the brutal murder of his new wife. As the Resistance resurges, claiming a conspiracy, Lex doesn’t know what—or who—to believe. When old enemies resurface in new disguises and trusted friends start keeping secrets, normal splits right down the middle, leaving Lex and Quin on opposite sides.

Prophecy—the second novel of Ellery Kane’s Legacy trilogy—continues the story of Lex and Quin, testing the strength of friendship, forgiveness, and love.

Prophecy is the second book in the Legacy trilogy by Ellery A. Kane and takes readers on another suspenseful, mysterious and riveting journey that will leave you guessing until the very end.

Life for Lex Knightly has changed a lot since the events of the first book Legacy. More than a year has passed since Lex, Quin and their friends managed to help disable the Guardian Force and restore their fragile world to some sense of normalcy. Yet, their world begins unravelling once again when Quin's recently paroled father, George McAllister is arrested and charged with the murder of his new wife Shelley. Torn between supporting Quin and her own doubts about George's innocence, Lex finds herself struggling. As their relationship frays, Lex and Quin drift apart, but when old enemies resurface with dangerous new motives, things take on a whole new level of danger when it becomes clear that those in power still pose a threat to not only the happiness of Lex and those she loves, but their very lives......

Prophecy kicks off more than a year after the last book, and I was surprised to see how much has changed. Ellery A. Kane has a lot of tricks up her sleeve as Prophecy mainly focuses around Quin's father and his court trial, but also manages to make you question what else is going on with the bigger corporations and companies now that most emotion altering drugs have been banned from San Francisco.

The characters have come a long way since the last book and I was thrilled to see how much they've changed. Emotions and feelings are tested in this book as loyalties and the strength of the love Lex and Quin share are repeatedly put to the test. Kane manages to make her characters, most importantly Lex, face a lot of truths and not everyone manage to come out unaffected.

Well written and well paced, Prophecy was an enjoyable read that made me feel for Lex and many of the other characters. Old faces blend with new and Kane manages to keep you on your toes as well as questioning Quin's dads innocence yourself. Yet in true Kane style, we soon learn that not everything is as it seems and I'm personally really excited to discover what implications our discoveries in Prophecy have in the third and final book Revelation!

Source: Sent for review by author (Thanks so much Ellery!)
Format: Paperback
Buy it: Bookworld | Amazon | Barnes & Noble
My Recommendation: This series would be perfect for dystopian fans; especially those who loved Article 5 by Kristen Simmons
Cover: Goes together very well with the cover for Legacy.
Will I read sequel/continue with series: Yes. I've very much looking forward to reading the third and final book!