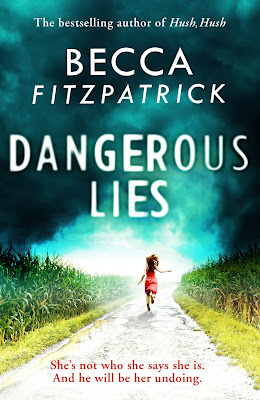 A teen is forced to make a fresh start after witnessing a violent crime—but love and danger find her anyway in this novel from Becca Fitzpatrick, the New York Times bestselling author of the Hush, Hush saga.

After witnessing a lethal crime, Stella Gordon is sent to the middle of nowhere for her own safety before she testifies against the man she saw kill her mother’s drug dealer.

But Stella was about to start her senior year with the boyfriend she loves. How can she be pulled away from the only life she knows and expected to start a new one in Nebraska? Stella chafes at her protection and is rude to everyone she meets. She’s not planning on staying long, so why be friendly? Then she meets Chet Falconer and it becomes harder to keep her guard up, even as her guilt about having to lie to him grows.

As Stella starts to feel safer, the real threat to her life increases—because her enemies are actually closer than she thinks…

Dangerous Lies is the latest release from best-selling author Becca Fitzpatrick and is a surprisingly warm read that features a lovely coming of age story and wonderful character growth.

Everything about Stella Gordon is a lie. Her name, her life, her entire history. Everything about her is a carefully crafted lie orcastrated by the United States government after Stella witnessed a violent crime and was put into witness protection following the arrest of the man she saw kill her mother’s drug dealer. Ripped away from her home, her boyfriend, and her life in Philadelphia, Stella is sent to small town Thunder Basin, Nebraska to hide out. Stella just wants her life to return to normal and despises the thought of being stuck in Thunder Basin....but with the help of some super friendly locals, her tough-as-nails "foster mother" Carmina and her sexy next-door neighbour Chet, Stella soon begins to find unexpected happiness. But what happens when the secrets Stella keeps come back to haunt her? Will she and those she cares about pay for her past mistakes?

Having now finished this book, I'm finding it really hard to categories Dangerous Lies. Despite its premise, it’s not really a mystery or a thriller per say, despite our heroine’s connection to a violent crime. It actually comes across more as a coming of age story at times and merges with a nice romance set in a small country town in Nebraska.

Dangerous Lies is a steadily paced novel and isn’t overly fast. Some readers may find the beginning slow, but those who persevere will be rewarded with a warm and enjoyable read, tinged with mystery and the possibility of danger. Becca Fitzpatrick always satisfies and Dangerous Lies is no exception; if you’re anything like myself, you’ll be sucked into the characters world within Thunder Basin after a few chapters and be hopeful things work out for Stella.

Yet in saying that, in the beginning I very much loathed Stella. I mean, loathed her. She came across as spoilt and selfish and infinitely ungrateful. And yet, as the story went on, we began to understand the life she’d led and what forced her to become so guarded and jaded. We learnt about what went on behind closed doors of her high society life, and as Stella took steps forward and began to grow, I ended up liking her much more. By the end of Dangerous Lies, she was almost a completely different character who had grown so much—and I liked this.

The romance within Dangerous Lies as also something I did enjoy. Fitzpatrick starts Stella and Chet out as friends who despite their obvious attraction, slowly develop their relationship. Stella is very conflicted as technically she had a boyfriend prior to her move to Thunder Basin, so her reluctance to "cheat" on him is the main conflict behind her and Chet’s relationship.

I enjoyed the vast array of characters who called Thunder Basin home; most notably Carmina, Chet and Inny. Personally I would love to explore them some more if the chance ever arose. Becca Fitzpatrick manages to make the small country town of Thunder Basin a place I would love to visit (if it existed in real life that is!) with its swimming holes, carhops and carnival fun!

Overall a good read, Dangerous Lies admittedly starts slow, but then picks up to be an enjoyable tale. Worth a read!

Source: Sent for review by Simon & Schuster (Thanks so much Jen!)
Format: Paperback ARC proof
Buy it: Bookworld | The Nile | The Book Depository | Amazon
My Recommendation: Enjoy mystery and romance? This is for you!
Cover: I love the great of our Aussie cover and the way the cover represents Thunder Basin
Will I read sequel/continue with series: This is a standalone novel, but I'll always read whatever Becca Fitzpatrick releases.....