Book Shelf: Finding It (Losing It #3) by Cora Carmack 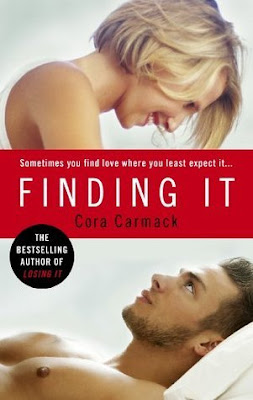 Spending a few months travelling around Europe – with no parents, no responsibilities and a no limit credit card – Kelsey’s having the time of her life.

But when she completely embarrasses herself in front of the hottest guy she’s ever seen, she soon realises there’s more to life than the next party.

What she doesn’t realise is that although she’s on a journey to find herself, she will end up finding The One...

Finding It is the third instalment in Cora Carmack’s brilliant Losing It series and follow Kelsey Summers, best friend of Losing It protagonist, Bliss, as she jets around the globe; finally discovering her own version of happiness in this sensual and exciting story!

Personally, I’ve always found something thrilling about the idea of backpacking across Europe; meeting new people, seeing incredible sights, sleeping wherever you find somewhere to sleep and just basically living. Admittedly, I’ve never had the chance to do so myself, though I hope to in the future, but for the time being Finding It gives me the opportunity to live vicariously through Kelsey as Cora Carmack details her trip across Europe.

I have to say I enjoyed the overall adventure of this story. Though I missed the dual POV’s we had in Faking It, I found it easy to witness things unfold through Kelsey’s eyes. I would have loved to have been in Hunt’s head as well, but I was satisfied all the same. In all honesty, Finding It isn’t my favorite book in the series--that honor still belongs to Losing It, with Faking It in the number two spot, but Finding It was still a great read in its own rights.

This book can in my opinion, easily be read as a standalone, or as part of the series. You don’t need to have read the previous books to read this one, though having done so myself, I think it gave me a greater appreciation for the discoveries we made about Kelsey in this book. Finding It really allowed me to see her in a different light and realize there’s a lot more to her than the fun-loving, party girl we’ve previously known.

I like Kelsey; I do. She feisty, witty and full of life, but she’s also very damaged. Something that really only becomes evident in Finding It as Kelsey fights to loose herself in drinking, partying and men. She’s travelling the globe on the journey of a lifetime, but it’s also very clear from the beginning of this book that Kelsey is running. Running from her painful past and even her present.

I enjoyed the way Cora Carmack wrote Kelsey. It’s very easy to see her as real—I’ve known people who experienced life the way she did and who chose to get lost in the meaningless experiences as she did, but that being said, seeing Kelsey be swept off her feet so intimately and begin to trust and let someone in as she did Hunt was very sweet. With her vulnerabilities on display, and the truth about her childhood revealed, Carmack details Kelsey’s journey to trust and love perfectly amidst the adventure she is on.

And the source of Kelsey’s salvation lies in her form of Jackson Hunt; a tough ex-military man who proves to be unexpectedly adventurous and incredibly sweet as he joins Kelsey on her trip across Europe. This handsome and protective new companion of Kelsey’s is quite the mysterious, but alluring stranger, who quickly becomes a friend and then more to Kelsey. I seriously adored Jackson! He was appealing from the very beginning, but every time he would do another sweet or kind thing for Kelsey, I fell for him a little bit harder. I will be honest; Jackson’s secrets were something I had a feeling about from the beginning. It wasn’t something I hadn’t seen before, or been not expecting, but I still enjoyed the repercussions it had on his and Kelsey’s sweet, sexy and sensual relationship.

Sensual, addictive and intense, Finding It is another great story by Cora Carmack. With sexy characters, passionate romance and an endearing storyline, this will be sure to entertain!

Source: Purchased by me from The Book Depository
Format: Paperback
Buy it: Bookworld | The Nile | The Book Depository | Amazon
My Recommendation: This is a MUST READ NA series!
Cover: Love the red, although the guy is not how I picture Hunt at all!
Will I read sequel/continue with series: This is the last full length novel in this series, but I'll read ANYTHING Cora Carmack writes!