Book Shelf: Her Majesty's Necromancer (The Ministry of Curiosities #2) by C.J. Archer 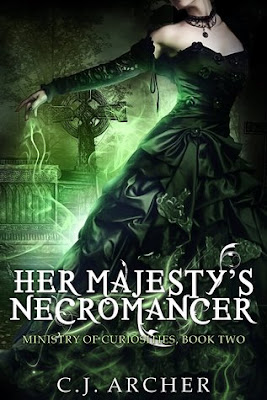 When bodies go missing from the cemetery, Lincoln and the Ministry of Curiosities investigate. But not Charlie. As a housemaid at Lichfield Towers, she doesn't get involved in Ministry business.

Instead, she conducts investigations of her own. She searches for details about her real mother, and makes inquiries into Lincoln's background. What she learns has the power to destroy the fragile trust they've built, or bring them closer together.

As secrets are revealed, and investigations don't go as planned, Charlie finds her necromancy sucking her into a whirlpool filled with betrayal, lies and danger.

Her Majesty’s Necromancer is the second novel in C.J. Archer’s brilliant Ministry of Curiosities series and certainly gives its predecessor a run for its money in excitement, exhilarating romance and addicting storyline! As impossible as it seems, this series just keeps getting better and better and is quite possibly the best paranormal historical I have ever read!

After falling head over heels in love with Charlie, Lincoln and the entire gang in The Last Necromancer, I was more than ready to dive straight back in as soon as possible, so it’s pretty much an understatement to say I devoured Her Majesty’s Necromancer as soon as I got my hands on it. The incredible world C.J. Archer has created within its pages is so lush and inviting and endlessly addictive. I found it near impossible to put Her Majesty’s Necromancer down and found that I kept reading and reading; adoring the storyline and characters.

Charlie Holloway has found a home for herself at Lichfield Towers under the employ of Lincoln Fitzroy and the Ministry. She has a "family" in the form of Seth, Gus, Cook and even the reluctant Lincoln himself and is enjoying learning about her abilities as a necromancer, defense training with Lincoln and even her job as a maid in Lichfield. Yet when it becomes apparent someone has been stealing bodies from the local cemetery, Charlie can’t help but worm her way into Lincoln’s investigations, whilst doing her best to learn more about his own personal history. As the two of them search for answers about what is going on, Charlie finds it harder and harder to deny her feelings for Lincoln and soon it becomes clear her medaling in his past has the power to bring them closer or tear them apart forever…..

There is no doubt in my mind that this series is simply spectacular! I don’t read a lot of historical, but when I do, it’s these kinds of novels that keep my going back for more. Incredibly paced, well written and wonderfully described, Her Majesty’s Necromancer was exciting and electric and so addictive to read. Archer’s characters are so very likable from our heroine Charlie to those who also call Lichfield Towers home and bring such life to the story.

I really enjoy the forward moving storylines that have been in each novel so far and love seeing the characters’ lives continue to move forward whilst holding onto the same essence with each novel. I love learning more about Charlie's history, her capabilities and what she can do as a necromancer. There's so much fun to be found in this novel, especially though Charlie's quick thinking wit and sharp tongue. Archer writes some really brilliant dialogue within this series, often between Charlie and Lincoln who have a sensational chemistry together.

I'm completely in love with our heroine Charlie. She is so strappy and fighting and I just adore everything about her. Archer writes her in such a manner that's she's impossible not to love with her likability, vulnerabilities and fierce determination. I love the growth in her that we've already seen and like seeing her continue to develop. Charlie has such fire and life in her despite all she has been through and I have the utmost respect for her. I love how much power and flair she brings to the story and as the main character there's no one I'd rather follow--Charlie just manages to be everything we need and I can only imagine what she'll do next; she certainly manages to keep me on her toes!

Lincoln Fitzroy is a mysterious, calculating and beguiling individual. He is still a real mystery to me despite two novels now under my belt......and I love it. I love him! Basically I think Archer outdoes herself with her characters and I can't compliment them enough. Lincoln can be best described as Charlie's love interest and somewhat reluctant partner in crime but he really is so much more as a powerful man of social standing and ability himself. An investigator, Lincoln often finds that Charlie has managed to worm her way into his investigations despite his reluctance and plants herself in almost every aspect of his life. He has been reluctant to care for Charlie, but it's quite clear he does; deeply, and the hesitant way he begins to let her, and us as the reader, into his past and mind is wonderful, and addictive to watch unfold.

I want to be honest.....C. J Archer has me wholly invested in Charlie and Lincoln's romance in this series. As you can probably tell, I'm a fan of them individually, but together Charlie and Lincoln become all consuming and highly, highly addictive. They have such a fantastic dynamic together that amps everything up. Seeing two people fall in love this way is one of the best ways if you ask me and Archer does this so well. Charlie and Lincoln have such chemistry together that comes across during unexpected encounters and tender moments that see the two of them grow closer with Lincoln's walls coming down during these times and letting himself act on what he really feels and desires.

Her Majesty’s Necromancer easily gets better and better with the turn of every page and C.J. Archer offers many laugh inducing, smile drawing and endearing moments throughout the story. Offering new light into Charlie's heritage and Lincoln's history, Her Majesty’s Necromancer concludes in a manner that will have you gaping and praying the next instalment will be released sooner rather than later!

I highly enjoy this series and wouldn't hesitate to recommend with my whole heart and soul!

Source: Sent for review by the author (Thank you C.J!)
Format: Kindle ebook
Buy it: The Book Depository | Amazon | Barnes & Noble | Kobo
My Recommendation: This series is a MUST READ for paranormal and supernatural fans!
Cover: Stunning. Simply stunning! The covers for this series are some of the most beautiful I've ever seen.
Will I read sequel/continue with series: YES! Need. Next. Book. Now!