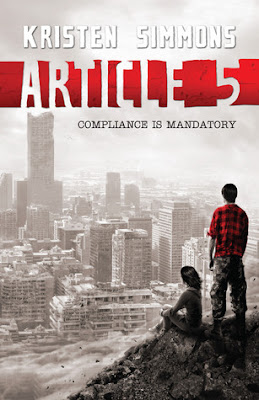 New York, Los Angeles, and Washington, D.C., have been abandoned.

The Bill of Rights has been revoked, and replaced with the Moral Statutes.

Seventeen-year-old Ember Miller is old enough to remember that things weren't always this way. Living with her rebellious single mother, it's hard for her to forget that people weren't always arrested for reading the wrong books or staying out after dark. It's hard to forget that life in the United States used to be different.

Ember has perfected the art of keeping a low profile. She knows how to get the things she needs, like food stamps and hand-me-down clothes, and how to pass the random home inspections by the military. Her life is as close to peaceful as circumstances allow.

That is, until her mother is arrested for noncompliance with Article 5 of the Moral Statutes. And one of the arresting officers is none other than Chase Jennings—the only boy Ember has ever loved.

Lush and incredibly unique, Kristen Simmons's debut novel Article 5 is a fast paced, forward moving and incredibly addictive dystopian. Featuring a sassy and likable heroine with so much promise and an exciting storyline, Article 5 sees author Kristen Simmons explore a world devastated by poverty with a society bound by a code of morals that limit what people feel, how they act and who they’re involved with!

I feel I need to start my review by saying how deeply I enjoyed Article 5. Prior to beginning the novel, I wasn’t sure exactly what to expect but I really really loved this book! After waiting so long to begin this novel, I now can’t believe I didn’t read it earlier—Article 5 was genuinely enjoyable from beginning to end.

Article 5 is told through the eyes of Ember Miller, a smart and normal seventeen year old girl who lives in a post war United States. Three years after the last war, society is now ruled by a Moral Statute where individuals face fines for bad behavior, charges for indecent actions such as kissing and handholding and can be arrested for simple things like reading the wrong books or being outside after curfew. Society is now controlled by the government with rules enforced by vicious soldiers and officers.

Ember has always managed to live life under the radar, but when her mother is arrested and taken away for noncompliance of one of the country’s moral rules, Ember finds herself thrown in a rehabilitation clinic but not before coming face to face with one of her mother’s arresters; the only boy Ember ever loved, her old best friend and someone she hasn’t seen in years, Chase Jennings….What happens after will change Ember and change how she sees the world forever.....

As I previously mentioned, I really enjoyed this novel. As far as dystopians go, it was well thought out with just enough world building at this point in time to keep me interested; I foresee a lot more in future stories and can’t envision where Simmons plans to take her series. As the main character Ember was great to follow. Her voice was smart and natural and her reactions seemed easy to believe. Simmons has written an excellent leading lady in Ember; one who holds promise for potential growth and development, but who is also already a great character.

I’ll be honest here; Kristen Simmons won me over the moment she introduced Chase. A government officer, Chase was Ember’s best friend and neighbour; someone she was once close to but hasn’t seen for years. The confliction in their relationship and the contradictions in the two of them and how they feel make for some interesting reading. Chase is one of those sexy conflicted characters who are fighting the system for those they love and I adore the chemistry he and Ember have. Simmons develops their relationship well; they have a history, but have been apart for so long. They’ve both changed but still care deeply about the other, something that becomes even more apparent with the turn of every page. I certainly hope Simmons keeps developing their romance and relationship even more!

With an exciting storyline and fabulous characters, Article 5 was just a downright brilliant read. I’m thrilled with the story Simmons has penned already and can’t wait to get my hands on the second book!

Source: Purchased by me from The Book Depository
Format: Paperback
Buy it: Bookworld | The Nile | The Book Depository | Amazon
My Recommendation: This is a brilliant dystopian and absolutely worth a read!
Cover: I love the white and red of this cover. It's simple but really works.
Will I read sequel/continue with series: Yes!