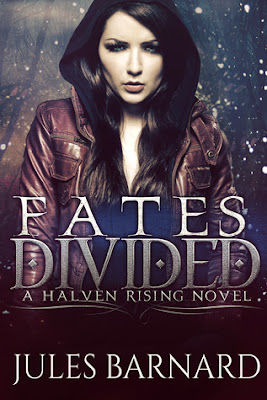 Elena Rosales has busted her ass to get into a good college. She’s the only one in her family ever to attend, and expectations are high. No pressure. But Elena’s got this one in the bag, because she’s as dependable as the molecules she studies, as reliable as the chemical reactions that comfort her in their predictability. Until they don’t.

Elena has always wondered why her mother abandoned her on her first birthday. It’s not until she turns eighteen and her chemistry experiments go berserk that she learns the truth: Her mother wasn’t human, and the Fae are willing to harm those Elena loves if she doesn’t use her power over the elements to cure them of a deadly disease.

Derek, Elena’s brooding neighbor, isn’t the friendliest guy, but he has access to an off-hours lab and is willing to help Elena create the antivirus. He has his own secrets to keep, and this business Elena is mixed up in could blow his cover. But when Elena and Derek get together, more than chemicals spark fire—and they soon discover just how complicated attraction can get when they find themselves on the other side of the portal, fighting for survival. Lives collide, and allegiance and love are tested, in Fates Divided.

In the Halven Rising Series, love and ancient allegiances are threatened when the worlds of Fae and Halven collide. Each Halven Rising novel features a different couple and may be read as a standalone, but an overreaching story arc connects the books, so it’s fun to read them in order.

Fates Divided is the first novel in Jules Barnard’s new Halven Rising series and is a brilliant start to what I’m sure is going to be a very exciting and entertaining series! Barnard introduces readers to two extremely likable main characters and a new world just brimming with possibilities.

I was very impressed with how well written Fates Divided was. Jules Barnard’s writing style was excellent and she had a way of delightfully describing things whilst never going over the top. The storyline was forward moving and I enjoyed the balance of romance, action and the paranormal woven together. The concept of the Fae is less faerie and more the TV show The Lost Girl (which I LOVE I might add!) and I really liked that Barnard has made a real attempt to make something different with this magical tale.

Weaving together paranormal and fantasy elements, Fates Divided is told through the varying POV’s of Elena Rosales, a collage freshman whose life takes a drastic turn when she discovers on her eighteenth birthday that she can do incredible things with the wave of her hand, and Elena’s neighbour Derek, who is brooding, guarded and hiding a secret of his own. As Elena and Derek find themselves thrown together, they begin to explore the attraction that simmers between them; at the same time they find themselves in the middle of a race against time to find a cure for a disease that is threatening the very lives of the people they come from, people they didn’t know even existed until now.

Fated Divided is a paranormal tale, but is almost more fantasy than anything else. There’s plenty of magic to be found within its pages and I was very impressed with the fantasy element in Fates Divided being so based in science. Jules Barnard competently describes her characters abilities through basic scientific terms and explains how their abilities work in a very believable and justifiable way. I found this refreshing and applaud her for taking this road.

As the main characters, I very much loved Elena and Derek. I loved that Barnard gave Elena some Latina heritage and included it subtly within the story. Elena is feisty and brave and really, really likable. She’s someone you can’t help but like and it was very easy to follow. Her relationships with those around her were wonderful to witness and of course I adored her romance with Derek, who definitely manages to hold his own as a character and an individual.

Derek is brooding and brave and has his own fantastic voice within Fates Divided. Derek’s abilities were really interesting and I loved how deeply he came to care for Elena. Derek had his own secrets and learns a lot about himself as a Halven in Fates Divided; something that only made me love him more, based on the decisions he made.

Jules Barnard writes the relationship between Elena and Derek really well. There’s an initial attraction obviously, but Barnard chooses to have them get to know each other before jumping headfirst into things. The sexual tension is there; nicely explored and developed within the story. There’s one sex scene, decently written and sensual for this NA, but plenty of kissing and intimacy for those romance lovers like me.

Personally I’m excited about getting to learn about the Fae people and their kingdoms of Tirnan and I’m really looking forward to the next few books. I have my fingers absolutely crossed the sequel with feature Elena’s best friend Reese and the cocky Fae warrior Keen, but I’m actually wondering if we’ll get the chance to see more of Mateo, Elena’s cousin too.

Well written, deeply exciting and brimming with romance, Fates Divided was very satisfying as a standalone romance, but leaves me very excited to read the rest of the series, featuring different couples and exploring more of the Fae!

Source: Sent for review by author (Thank you Jules!)
Format: Kindle ebook!
Buy it: Amazon | Barnes & Noble | Kobo | iBooks
My Recommendation: If you love well told fantasy/paranormal then Fates Divided is for you!
Cover: This cover is really beautiful--I love it!
Will I read sequel/continue with series: Yes. Can't wait for more!