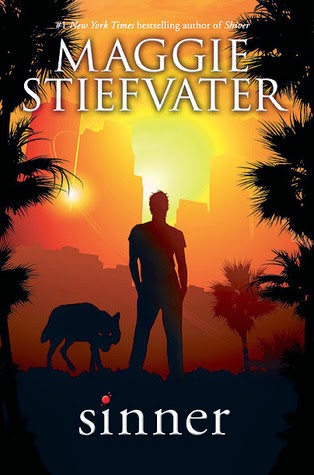 A standalone companion book to the internationally bestselling Shiver Trilogy.

Sinner follows Cole St. Clair, a pivotal character from the #1 New York Times bestselling Shiver Trilogy. Everybody thinks they know Cole's story. Stardom. Addiction. Downfall. Disappearance. But only a few people know Cole's darkest secret -- his ability to shift into a wolf. One of these people is Isabel. At one point, they may have even loved each other. But that feels like a lifetime ago. Now Cole is back. Back in the spotlight. Back in the danger zone. Back in Isabel's life. Can this sinner be saved?

Sinner is the novel by Maggie Stiefvater that fans have been waiting for ever since Cole St. Claire was first introduced to the Wolves of Mercy Falls series and stole readers hearts with this unique view of the world and self destructive nature. Winning fans over with his unusual attitude, Cole finally gets his own tale as he and Isabel face their issues once and for all!

Set in L.A and as far away from Mercy Falls, Minnesota as you can get, Sinner is told through the eyes of Cole St. Claire and Isabel Culpeper. Varying back and forth between their POV’s, Sinner explores Cole and Isabel like never before and sees the two of them face some startling truths about the world around them and most importantly themselves. There lot of choices to be made and it’s only as Cole and Isabel accept some difficult truths will they be able to find their own happiness.

As always I adore Maggie Stiefvater as an author and I am so glad she decided to write this companion novel to her Wolves of Mercy Falls series. Fans needed to see this book and Cole and Isabel’s story needed to be told. And Stiefvater does her usual fantastic job with this dramatically, and beautiful told story. The writing is flawless and deep and the characters one of a kind.

As a reader, Cole St. Claire is one of those rare characters you come across every now and then that is completely outside of the box and has their own individual personality that cannot be compared to anyone else within the genre. Cole is damaged, broken and self-destructive. He’s lost and feels alone despite being surrounded by people and it’s this loneliness that drives so much of Cole’s decisions. He’s a self-centered maniac who sees the world like no other. Honestly, some of the things that come out of Cole’s mouth and that Maggie Stiefvater writes surprise me purely because they’re so unusual and not what you would expect someone, rock star or otherwise to ever admit or say.

Cole is looking for something; has been for a while despite his rock star status and the fact he could have anything he wanted. Perhaps this is what drove him to become a wolf and caused him to do many of the other dangerous things he’s done that are simply self inflicted that have put himself in danger. It’s this search that sees Cole connect with Isabel and it’s this desire to be seen simply for who he is as Cole, not Cole St. Claire that makes Cole so heartbreaking to follow and read about.

Isabel Culpeper is as complicated and as fractured as Cole. On the outside it would appear that she has everything; perfectly composed with beauty, money and rich friends, but Isabel is cold and guarded and determined to keep people out. I really love Isabel. I have ever since we discovered what a great friend she could be back in the Mercy Falls book and I’ve loved having the opportunity to have her front and center in this book. Isabel has a lot of issues, a lot, but I loved seeing her slowly face them and grow in Sinner.

Cole met his match in Isabel back in the second Mercy Falls book Linger and ever since the two of them have been doing a will-they-or-won’t-they dance that has seen a solid foundation develop between them as they unexpectedly connect. Cole and Isabel have a fantastic chemistry and this helps drive the fantastic dialogue shared between them. It’s was refreshing to discover a role reversal in Sinner that sees Isabel as the one who, despite Cole’s history and status, is the one who wants to keep him at arms length. Cole is ready for Isabel and simply wants her, but Isabel is the one who refuses to take the leap for fear of having her heart shattered. I thought Steifvater did a fantastic job with their relationship; the physical aspect took a back seat to the emotional at times, but was still fiery and addictive too.

From beginning to end, Sinner is everything you could hope for; lush, imaginative and entertaining. Cole and Isabel do not disappoint as we see their story unfold, something that is difficult and beautiful to witness while managing to be as uplifting as it is somber at times. Maggie Stiefvater you’ve done it again—simply brilliant!

Source: Sent for review by Scholastic Australia (Thank you guys!)
Format: Hardback
Buy it: Bookworld | The Nile | The Book Depository | Amazon
My Recommendation: This is something fans of The Wolves of Mercy Falls series will definitely want to read.
Cover: I love the colour of this book--the orange is so striking.
Will I read sequel/continue with series: This is the last one in this series, but I'll read whatever Maggie Stievater writes in the future!