Book Shelf: Pleasure of a Dark Prince (Immortals After Dark #9) by Kresley Cole 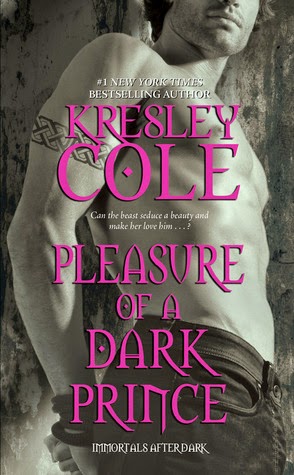 #1 New York Times bestselling author Kresley Cole enraptures again with this seductive tale of a fierce werewolf prince who will stop at nothing to protect the lovely archer he covets from afar.

Lucia the Huntress: as mysterious as she is exquisite, she harbors secrets that threaten to destroy her -- and those she loves.

Garreth MacRieve, Prince of the Lykae: the brutal Highland warrior who burns to finally claim this maddeningly sensual creature as his own.

THAT LEAD TO A PLEASURE SO WICKED....

From the shadows, Garreth has long watched over Lucia. Now, the only way to keep the proud huntress safe from harm is to convince her to accept him as her guardian. To do this, Garreth will ruthlessly exploit Lucia's greatest weakness -- her wanton desire for him.

Pleasures of a Dark Prince is another great installment in the addictive and sensual Immortals After Dark series featuring Lykae Garreth and Valkerie Lucia the Archer!

This is plain and simple another great read. Pleasures of a Dark Prince, finally tells the tale of Lucia and Garreth--the Valkerie and Lykae we first met all the way in the first book, amidst Emma and Lachlain's tale, and yet who seemed to have their own connection and secrets of their own.

I really liked the way Kresley Cole wove Lucia and Garreth's tale together. I thought it was really interesting to learn that their story actually began long before Lachlain and Emma ever met. I thought the setting and plotline of this book was really interesting. Getting lost in the Amazon and facing massive gators, shifters and long dead God's proved to be highly entertaining--the atmosphere of the story was exhilarating.

I adored Lucia and thought she had such great strength and personality. She was a really likable heroine and someone I truly enjoyed reading about. Her history was really shocking and harsh, but I thought the way it impacted the story was really genius of Cole. It was somethingdifferent to explore.

Garreth was a really sexy Lykae. What can I say....there was something so very sexy about that Scott. I can certainly understand why Lucia fell for him. With his gruff and fierce alpha nature and he-man attitude, it was very easy to become drawn to him. He cared deeply for Lucia and fought everything for her--that determination and desire was very admirable and great to read about.

I really enjoyed the sensual relationship between Lucia and Garreth. Considering Lucia's history, it was very fitting to see Lucia re-discover passion and trust someone with her body and heart again. Their sexual tension was off the charts and very addictive to read about.

A thrilling and confronting ending, leaves three of the characters in strife and has me ready to dive straight into the next book pronto!

Source: I bought
Format: Paperback
Buy it: Bookworld | The Nile | The Book Depository | Amazon
My Recommendation: Don't miss this fantastic series!
Cover: Sexy as always.
Will I read sequel/continue with series: YES!