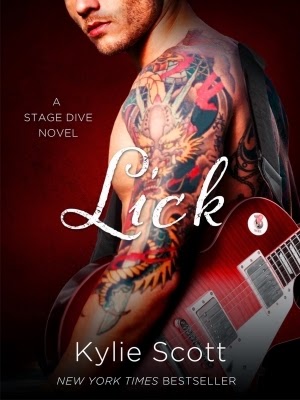 Evelyn Thomas's plans for celebrating her twenty-first birthday in Las Vegas were big. Huge. But she sure never meant to wake up on the bathroom floor with a hangover to rival the black plague, a very attractive half-naked tattooed man in her room, and a diamond on her finger large enough to scare King Kong. Now if she could just remember how it all happened.

One thing is certain, being married to one of the hottest rock stars on the planet is sure to be a wild ride.

Lick is the superb first novel in Kylie Scott’s Stage Dive series and addictively blends passion and humour in this deeply sensual romance that will without a doubt hook you from the very first page!

Why oh why did I wait so long to read this book?!? I mean, honestly…I must have been out of my mind because Lick by Kylie Scott was absolutely sensational! Having now read Lick, I have to say I can see why Kylie Scott is fast becoming a self-published turned published sensation. If Lick is any indication of what Ms. Scott is capable of, then I look forward to many, many more well told, addictive and highly entertaining stories in the future.

Lick is told through the eyes of Evelyn Thomas, a rational and level headed twenty-one year old woman whose life is turned upside down when she wakes up on the bathroom floor after a huge night out, married to one of worlds most famous rock stars with no recollection of how she got that way! As the lead guitarist of rock band Stage Dive, David Ferris may be the sexiest thing she’s ever seen, but surely Evelyn doesn’t want to stay married to someone she barely knows, right? Right? Wrong! As the two explore what their options are, Evelyn and David slowly begin to connect and get to know each other and Evelyn finds herself falling for her husband, although there’s trouble in store for these two.

The characters in this book were fantastic! From our leading lady and protagonist Evelyn to rock god David to the bunch of minor characters we met briefly including fellow band members Mal, Jimmy and Ben. Personally I’m already dancing with excitement for Mal’s story next and Jimmy’s following—I’m ready to get to know these boys more!

As the main character Evelyn was seriously awesome to follow! One of the reasons I loved Ev so much was that she was such a normal, down to earth person. She was someone easy to follow with fears, flaws and worries. I think Kylie Scott did a great job ensuring that Evelyn was relatable and authentic and that she encompassed today’s woman. I liked that she wasn’t stick thin and perfect and that she had personality as well an honour, but featured her own insecurities and inhibitions.

Kylie Scott has done a great job with the romance in this book and the relationship she weaves together between Evelyn and David. To start with David is a boneifide rock god and so sexy to boot! Scott has written him appealing physically and sexually but also taken the time to develop his fears and insecurities. David oozes charm and dark appeal but he has trust issues and at times a snappy temper. David often acts and talks before he thinks things through and this makes for quite a few difficult moments between he and Evelyn as the two of them try to work out the kinks in their relationship.

Personally I really liked the romance between Evelyn and David. Evelyn is just a very normal girl, while David is rich and famous, but they mange to connect so well. Evelyn makes David feel normal and treats him like an actual person with feelings and needs outside of his rock and roll lifestyle whereas David appreciates Evelyn exactly as she is. I really liked how Scott depicted their relationship both physically and mentally. Obviously both are practically strangers to the other when they get married but as they get to know each other their relationship deepens. Scott depicts the physical aspect of their relationship very accurately and I appreciated her honest description of Evelyn’s true introduction into a sexual relationship and the feelings that brings to a person.

Electrifying and honestly addictive, Lick is a fantastic tale by Kylie Scott that not only follows an excellent pair but introduces us to other alluring characters that promise to reveal their own amazing stories! A brilliant read, through and through—I’m ready for the next book!

Source: Purchased from Kmart
Format: Paperback
Buy it: Bookworld | The Nile | The Book Depository | Amazon
My Recommendation: This is a brilliant series--READ IT!
Cover: Very sexy--I love it.
Will I read sequel/continue with series: YES