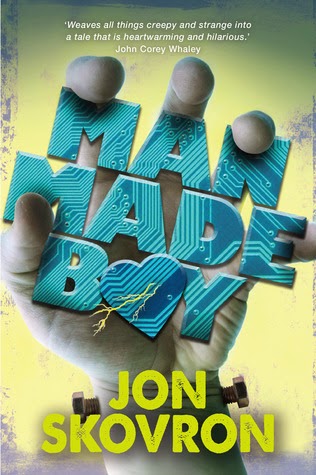 Love can be a real monster.

Sixteen-year-old Boy’s never left home. When you’re the son of Frankenstein’s monster and the Bride, it’s tough to go out in public, unless you want to draw the attention of a torch-wielding mob. And since Boy and his family live in a secret enclave of monsters hidden under Times Square, it’s important they maintain a low profile.

Boy’s only interactions with the world are through the Internet, where he’s a hacker extraordinaire who can hide his hulking body and stitched-together face behind a layer of code. When conflict erupts at home, Boy runs away and embarks on a cross-country road trip with the granddaughters of Jekyll and Hyde, who introduce him to malls and diners, love and heartbreak. But no matter how far Boy runs, he can’t escape his demons—both literal and figurative—until he faces his family once more.

This hilarious, romantic, and wildly imaginative tale redefines what it means to be a monster—and a man.

Man Made Boy by Jon Skovron, is an enigmatic re-imagining of the story that is Frankenstein’s monster and explores romance, friendship and what it truly means to be human in this unique twist on a classic!

Man Made Boy is a fun, imaginative read and I have to say, quite unlike anything I’ve ever read before. Detailing the life and adventures of Boy, the son of Frankenstein and Frankenstein’s Bride, Jon Skovron takes readers on a cross country adventure over the course of months that sees our main character make friends, enemies and a whole lot of decisions that force him to face himself.

Skovron’s writing is nice and detailed, telling Boy’s story well. I will be honest, there is a section in the book, around the middle, where I felt it slumped a little and the story seemed to lag. It was around this point where I found myself disinterested and at times highly frustrated by some of the supporting characters and the decisions they made. That being said, after this brief lag, the story did pick up and continue on nicely.

Featuring a male leading character, there’s no doubt in my mind that Man Made Boy would really appeal to the male population as it has a very "male" feel to it at times, with Boy’s way of thinking that of a typical teenage boy. Yet I think as a reader the blend of adventure and excitement with all the colourful characters from popular stories, (Frankenstein, Dr Jekyll and Mr Hyde, Medusa etc) showcased in Man Made Boy would win just about anyone.

Boy is quite likable and easy to follow as the protagonist. He takes chances and makes mistakes and really learns a lot throughout the story. There’s an undeniable level of pain to him at times, and it’s quite clear that he is haunted by what he is. Boy’s insecurities and childlike response to the world as he experiences different things for the first time is quite endearing.

Throughout the story Man Made Boy, Skovron introduces us a bunch of unique and unusual individuals with quirky personalities and histories that colour the story. Each adds something different to Boy’s journey, sometimes helping him, sometimes hindering him. I liked seeing so many different people/creatures. There was a wide variety and this certainly made for some interesting reading.

If you’re looking for something light and funny, but also has a softer side with entertaining characters and a decent plot, then Man Made Boy is it.

Source: Sent for review by Allen & Unwin (Thank you guys!)
Format: Paperback
Buy it: Bookworld | The Nile | The Book Depository | Amazon
My Recommendation: Fans of books like Cirque du Freak and similar tales will enjoy this.
Cover: I think it's simple but still quite cool
Will I read sequel/continue with series: This is a stand alone novel, but I would rule out reading more by Jon Skovron