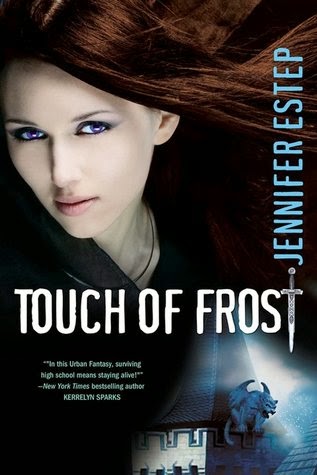 My name is Gwen Frost, and I go to Mythos Academy; a school of myths, magic and warrior whiz kids, where even the lowliest geek knows how to chop off somebody's head with a sword and Logan Quinn, the hottest Spartan guy in school, also happens to be the deadliest. But lately, things have been weird, even for Mythos.

First, mean girl Jasmine Ashton was murdered in the Library of Antiquities. Then, someone stole the Bowl of Tears, a magical artifact that can be used to bring about the second Chaos War. You know, death, destruction and lots of other bad, bad things. Freaky stuff like this goes on all the time at Mythos, but I'm determined to find out who killed Jasmine and why; especially since I should have been the one who died...

Touch of Frost is a fascinating start to a fast paced and promising YA series from Urban Fantasy author Jennifer Estep. Laced with Greek, Roman and Norse myth, Touch of Frost introduces readers to a beguiling school of magic, warriors and unexpected dangers, where gods and goddesses come alive and one girl is about to discover a destiny she never expected she had.....

Touch of Frost follows Gwen Frost, a student at Mythos Academy, a school that trains it's students to be warriors. A smart mouthed and snappy Gypsy, Gwen is different from her classmates, the majority of which are rich and powerful. Featuring decedents of gods, goddesses and all kind of mythical individuals, Mythos Academy sees Valkyries, Amazons, Spartans, Vikings and more scatter it's halls. Mythos Academy is a formidable place to learn but Gwen's lack of natural ability and coordination where fighting and all things mythological are concerned see her become a loner who keeps to herself. However, when a popular and prominent student is murdered and Gwen finds the body, the lack of interest by the student population make Gwen take action into her own hands as she sets out to discover why the girl was killed and a powerful magical artifact stolen.....

Man, Touch of Frost was a seriously fun novel to read! Honestly, I've had a copy of this book for almost three years and I can't believe I waited so long to read it! From the moment I started this book I was hooked. I know there are some mixed reviews out there, but this was just plain fun. Admittedly, Jennifer Estep's writing isn't the best I've read, but the intriguing world she's introduced me to and her smart, sassy heroine have completely won me over. The story was fast paced and there was plenty happening, with main character Gwen taking on a detective role of sorts when she begins investigating the death of a classmate with unexpected results.

Gwen was a great heroine to follow and I honestly love her already. I foresee her becoming truly kick-ass if Touch of Frost is anything to go by and I can't wait to see where Estep takes her. Gwen's inner monologue makes for some really fun reading and her easy desire to investigate the death of someone she barely knew makes me think highly of her. Gwen is smart, quick thinking, and though a tad insecure, comfortable in who she is. She's very likable, with a unique and riveting voice.

The school of Mythos Academy Jenner Estep has created makes me think of a blend of Hogwarts meets the world of Percy Jackson. This makes for a fantastic and promising setting that leads a lot to the aura of the novel. Gothic and dark, Mythos Academy is not your typical high school with it's students of the mythical variety. Typical teen drama weave together with magic and age old wars to create a mysterious campus.

The characters within this novel are already starting to win me over also. Gwen obviously stands out, as does her possible love interest, Logan Quinn a fierce and formable Spartan whose reputation as a womanizing bad boy is tested when compared to the sweet way he treats Gwen at times. Estep promises lots of heartbreak and difficulty for these two if Touch of Frost is anything to go by, but I look forward to future novels where they're concerned. Gwen also finds a completely unexpected friend in the form of a mean girl who starts off as an almost enemy, but proves to be not what she seems. Daphne was awesome! And her and Gwen are just great to read about---I think we're seeing the start of a wonderful friendship between these two!

When the murder of a student is discovered to be the start of a much bigger plan to release an imprisoned god whose previous actions almost destroyed the world, Gwen unexpectedly discovers a secret about her heritage that make it clear she'll have a major role in the upcoming war the bad guys are gung-ho on starting. Estep sets things up perfectly and I'm very eager to get my hands on the next book, stat! A great kick-off to a new urban fantasy series!

Source: I Bought
Format: Paperback
Buy it: Bookworld | The Nile | The Book Depository | Amazon
My Recommendation: If you're a fan of mythology and magic you'll love this one!
Cover: Pretty cool!
Will I read sequel/continue with series: Yes!