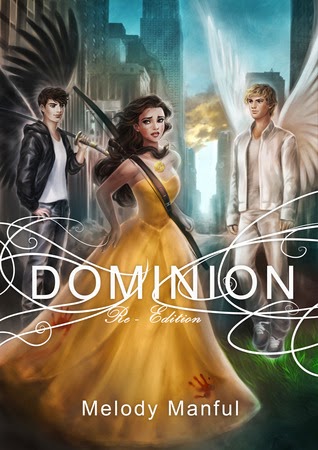 I Dare You.
Look Over Your Shoulders.
Do You See Them?
They are behind you...
They are always behind you.

Abigail Cells had a nightmare the day before she met Gideon, the new guy in school who has every girl drooling just to be near him. In her nightmare, she was murdered by a magical creature. As she gets to know Gideon, she begins to remember pieces of her nightmare, and was shocked when Gideon turned out to be the creature from her nightmare. Who is Gideon really? Should Abby allow herself to fall completely for him, or is he the next disaster waiting to happen?

Dominion by Melody Manful is a light and entertaining read that with its enjoyable plotline and intriguing romance will appeal to fans of Becca Fitzpatrick’s Hush, Hush series and Lauren Kate’s Fallen series.

Though the cover for Dominion is quite beautiful as far as cartoon depictions go it does give you a certain distinct impression of the story it houses. And while Dominion is admittedly a light and fun read, it’s also features a plotline that is deliciously woven together that I don’t believe is evident from the cover. While reading Dominion, it’s obvious that author Melody Manful has put a bit of thought into making sure she has a solid set up for her series. She sets up a unique and intriguing world of "good" and "evil" angels that translates well in Dominion. There is a lot I would still like to know about them, but I’m hopeful this will be expanded on more in future books.

Set in a world where most humans have two angels assigned to them; one good and one evil that influence and usually feed off emotions and energy, Dominion follows teenager Abigail as well as the two angels assigned to her, Tristan and Gideon. Told in three points of views, the thing I really liked about this book was that all three main characters had very distinct personalities and this was reflected well through their voices.

Abby is likable as the heroine—she’s smart, capable and quite able to handle herself in dire situations thanks to her father and the training she has done throughout her life. I did like Abby, but I admit at times it’s hard not to question her judgment, especially when it comes to Gideon. Tristan is your typical good guy, and that shines throughout this story. It’s not a bad thing, but rather something explored by Manful with his sharp and witty sense of humor and attitude during the book.

As for Gideon, he’s a real enigma for me. When we’re first introduced to Gideon, I kind of felt like I’d made up my mind about what kind of character he would be, but as the story wound on, I found myself rethinking my earlier thoughts. At the end of the day, Gideon is evil. It’s not something he’s ashamed of and it’s not something he really tried to hide. In fact, it’s something he prides himself on; making sure everyone is aware of just how evil and cruel he is.

Gideon kills and maims and it’s just what he is…..but at the same time he’s just so likable. There’s something so beguiling about Gideon’s voice within this story. The complex way he sees the world makes me smile. Even though I know I shouldn’t really like him, as he begins to care for Abigail, and as he starts to act differently where she’s concerned, it’s really hard not to.

Dominion features some of the stereotypical teen drama you see all the time, but this also blends in with tones of action and paranormal elements. My only issue with Dominion is that it coxes to an unexpected ending that seems to come left of center. I was a bit confused and although I see the possibilities it brings to the table, it confused me too. That being said, Dominion was an overall enjoyable read and I look forward to reading the next book.

Source: Sent for review by author (Thank you Melody!)
Format: Kindle ebook
Buy it: Amazon | Barnes & Noble | Smashwords
My Recommendation: Becca Fitzpatrick’s Hush, Hush series and Lauren Kate’s Fallen series--this is right up your alley!
Cover: Normally I don't like cartoon cover's, but this one is so unbelievably pretty!
Will I read sequel/continue with series: Yes, I would like to read more.....