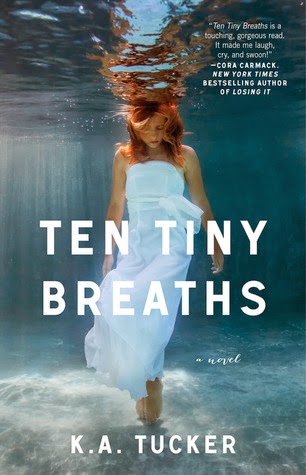 Kacey Cleary’s whole life imploded four years ago in a drunk-driving accident. Now she’s working hard to bury the pieces left behind—all but one. Her little sister, Livie. Kacey can swallow the constant disapproval from her born-again aunt Darla over her self-destructive lifestyle; she can stop herself from going kick-boxer crazy on Uncle Raymond when he loses the girls’ college funds at a blackjack table. She just needs to keep it together until Livie is no longer a minor, and then they can get the hell out of Grand Rapids, Michigan.

But when Uncle Raymond slides into bed next to Livie one night, Kacey decides it’s time to run. Armed with two bus tickets and dreams of living near the coast, Kacey and Livie start their new lives in a Miami apartment complex, complete with a grumpy landlord, a pervert upstairs, and a neighbor with a stage name perfectly matched to her chosen “profession.” But Kacey’s not worried. She can handle all of them. What she can’t handle is Trent Emerson in apartment 1D.

Kacey doesn’t want to feel. She doesn’t. It’s safer that way. For everyone. But sexy Trent finds a way into her numb heart, reigniting her ability to love again. She starts to believe that maybe she can leave the past where it belongs and start over. Maybe she’s not beyond repair.

But Kacey isn’t the only one who’s broken. Seemingly perfect Trent has an unforgiveable past of his own; one that, when discovered, will shatter Kacey’s newly constructed life and send her back into suffocating darkness.

Ten Tiny Breaths by K.A. Tucker is a beautifully written and gorgeous story of life, love and loss. With magnetic characters and a strong storyline, this is a stunning debut about the power of forgiveness and the healing possibilities that moving on can bring.

As someone beginning to develop a real love for New Adult fiction, I'm always on the lookout for brilliant new NA tales to devour and while I was uncertain about what this story would bring, I have to say I was very much blown away by Ten Tiny Breaths! And in saying that, having now read this story, I can see why K.A. Tucker is making a name for herself in the NA genre. Her storytelling is wonderful; her writing strong but beautiful. Tucker took a very emotional situation and explored the effects it had on the life of her main character and those around her.

Following twenty year old Kacey Cleary, a young woman still haunted by the tragic loss of her parents, best friend and boyfriend at the hands of a drunk driver, Ten Tiny Breath explores the difficulty Kacey and her fifteen year old sister Livie still face four years later. Fleeing with her sister and escaping from a dangerous family situation to Miami, Kacey is still understandably haunted by the loss of those she loved in an accident she managed to survive herself but that left her tremendiously scarred, both physically and mentally.

Kacey is a very strong character to follow. She's very down to earth and normal, with a lot of sass and spunk, and is without a doubt wonderful to follow, but she's also very fractured. Something more evident with the turn of every page. Kacey has trust issues by the truckload and keeps a shield up around herself to keep from getting hurt. Though deep down Kacey cares strongly and loves deeply, she projects a tough girl exterior to the rest of the world and fights to keep people out. Kacey has a lot of hard truths to face in this book, especially when she slowly begins to come back to life thanks to the help of an egnigmatic young man and a surprising bunch of people who help to want her live again.

There wasn't a single character that I didn't fall in love with during this book! Obviously Kacey shines as our main character, as well as Trent as our male lead and love interest, but K.A. Tucker does a fantastic job giving her supporting characters real substance and life in Ten Tiny Breaths. Everyone from Kacey's sweet younger sister Livie, to their strong and surprising next-door neighbour Storm and her darling daughter Mia to adult club owner Cain and bouncers Ben and Nate managed to worm their way into my heart. Even minor, minor characters such a Officer Dan, landlord Tanner and Dr. Stayner impressed me; bringing so much life and colour to the book with their character dymanics and beautiful bonds.

Now, I refuse to give away spoilers, but the storyline Tucker explores with Kacey and Trent was the icing on the cake in this book, and so very well done. Honestly Trent is sexy as hell and he and Kacey have a wonderful chemistry. As a NA tale, you expect there to be a sexual aspect to the story and there is, but Tucker instead focus more on the romance and the connection between Kacey and Trent--something I found very refreshing. Obviously, these two are together physically within the story, but the way Tucker writes it allows us as the reader to explore the more connecting parts of their relationship than just the sex. Trent and Kacey were very sensual and they sizzle up the pages--the sexual tension is perfect, but the deeper connection they share and the way in which they help the other heal is what stole me.

Sexy, sensual and deeply moving Ten Tiny Breath is a brilliant read. Wit and sassy dialogue blend perfectly with beautiful characters you'll be sure to want more of. K.A Tucker has impressed me with her debut novel and has me ready to being the next book ASAP!

Source: Sent for review by Simon & Schuster (Thanks guys!)
Format: Paperback
Buy it: Bookworld | The Nile | The Book Depository | Amazon
My Recommendation: This is one of the best NA's I've ever read--a must read!
Cover: I think it's very pretty!
Will I read sequel/continue with series: YES!