Book Shelf: Rush Too Far (Too Far #4) by Abbi Glines 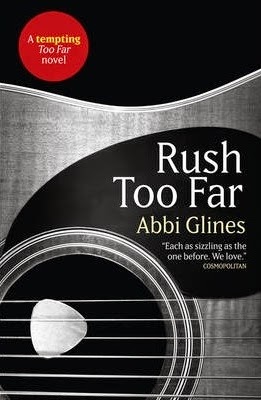 Get ready to fall hard for Rush…

Fallen Too Far introduced us to Rush Finlay, the gorgeous charming son of a famous rock star, and Blaire Wynn, the girl from Alabama who rode into Rosemary Beach, Florida, in a pick-up truck with a gun under the seat looking for her estranged father. United under one roof by the surprising marriage of their parents, Rush and Blaire couldn't hate each other more. But it only took a summer to for everything to change…

Fallen Too Far was Blaire's story. Now it's time for Rush to share his side, and for readers to fall all over again!

Rush Too Far is the highly anticipated re-telling of the first book in the Too Far Series, Fallen Too Far; this time told entirely by Rush Finley! As addictive and as deeply satisfying as all the other books in the series, Rush Too Far is exactly what fans have been waiting for!

As a not-so-closet Abbi Glines fan, Rush Too Far was a novel I had been dying to get my greedy little paws on for a long time. With books two and three, Never Too Far and Forever Too Far told through both Blaire and Rush’s eyes, the prospect of revisiting the events of Fallen Too Far which was told only through Blaire’s eyes again but with Rush at the helm was something I was never going to pass up.

Catapulting us straight into the scene where Rush and Blaire first meet and their journey begins, Rush Too Far was another brilliantly written and sensual Glines tale from the beginning. Personally I always love Abbi Glines books, and as always Glines doesn’t disappoint; exploring her characters in that expert way she does with chemistry and flair!

Fans already love Rush, but Rush Too Far offers us the chance to understand him in a way we never have before, but even I will admit I was surprised over some of the things that were going through his mind during certain situations that I otherwise believed he was indifferent to. These books always open your eyes to the true intentions of characters and what they really think and feel and I loved that we had this chance with Rush.

The beginning of Rush’s story with Blaire was really the biggest experience in his life, seeing as it changed so much about how he saw the world and how he felt. The relationship he develops with Blaire and the way he comes to love her changed how he acted and who he prioritized in his life. As fans we know how difficult Rush and Blaire journey was and all they would go through, so personally I think there’s something very satisfying going back to the beginning and seeing it all unfold again, but through Rush’s eyes this time. Obviously I was familiar with the storyline and the actual chain line of events, but that didn’t make it any less pleasing to witness once more.

Deeply sensual and electric, Rush Too Far is as sexy and as addictive as all other Abbi Glines novels. Rush and Blaire are as hot as they beautiful to read about and I have to give Abbi Glines props for delivering another brilliant story!

Source: Sent for review by Simon & Schuster (Thank you Jennifer!)
Format: Paperback
Buy it: Bookworld | The Nile | The Book Depository | Amazon
My Recommendation: A NA must read.
Cover: Simple, but lovely
Will I read sequel/continue with series: This should be the final Too Far novel featuring Blaire and Rush, but I'm invested in the spin-off books and anything else Abbi Glines writes!