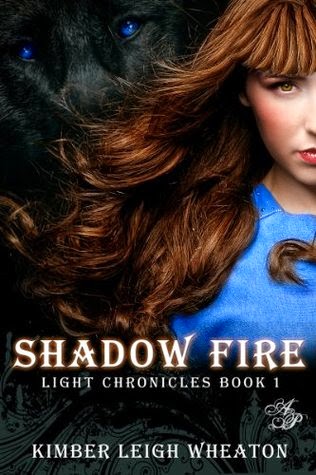 Ashlyn – a free-spirited teenager whose peaceful life is shattered when the village elders honor her with a perilous quest to recover a stolen relic.

Zane – a jaded mercenary, torn by his undeniable desire for Ashlyn and the dark secret that could make her hate him forever.

Delistaire – a malevolent sorcerer driven by an insatiable lust for power.
All three are bound together by an ancient relic supposedly infused with the power of a Goddess.

As Ashlyn and Zane race to stay one step ahead of the evil lurking in the shadows, their passions are ignited and their bond strengthens. But will they find the relic before Delistaire? Or has their entire quest been orchestrated from the very beginning by a madman in pursuit of ultimate power?

Shadow Fire is author Kimber Leigh Wheaton’s superbly addictive debut novel and is an incredibly romantic tale that blends elements of fantasy and magic together with wit, humor and danger.

Let me just begin by saying just how much I enjoyed this book. From the very opening chapter it really was a joy to read with its fun, light storyline that held all the aspects of danger and discovery I could ask for! High on the romance and featuring characters with a fantastic dynamic, Shadow Fire was very well written and told. Kimber Leigh Wheaton has created such an alluring world within it’s pages weaving together different elements of magic with mages, sorcerers and various creatures, some we’ve seen before and others created specifically for this series.

Shadow Fire is told through the eyes of Ashlyn, a simple but brave village girl who is chosen by her village to undertake a quest to find a sculpture of high importance that was stolen years ago and is thought to be hidden in dangerous ruins across the lands. As one of many maidens who have undertaken the quest to retrieve the sculpture over the years, none of whom have been successful nor have returned, Ashlyn faces the daunting task of braving horrendous monsters and dangerous lands if she hopes have even the slightest chance at succeeding.

Thankfully for Ashlyn, she has the mysterious and enigmatic mercenary Zane to accompany her on her quest, someone who sets Ashlyn’s blood on fire and appeals to her like no other. With her loyal wolf Shadow by her side, Ashlyn and Zane journey afar to find the sculpture, stumbling across numerous dangers as they do and various individuals and creatures who help, rather than hinder their expedition.

Honestly, I loved Ashlyn! I thought she was a great character to follow and loved how Wheaton wrote her. The growth she undertook during this novel while managing to retain her base personality was excellent. I thought Ashlyn was very natural and kind, but also brave when she needed to be. She connected well with those around her and made for a great heroine.

Ashlyn’s love interest in Shadow Fire comes in the form of Zane and boy do I love Zane. He’s such an alluring character and very, very sexy. He’s fierce and capable and willing to be naughty at times too. The romance between Ashlyn and Zane is a constant from the beginning and so much of this is due to Zane’s utter dedication to Ashlyn and his promise to protect her. Zane would do anything for Ashlyn, and although their romance develops quickly, it’s believable and very, very enjoyable. Wheaton keeps things progressing well, and Ashlyn and Zane’s relationship is always front and center amongst the already addictive storyline; making it impossible not to love these two!

Shadow Fire has a stunning main couple, but I was also swept away by pirate rouge Taranis and would have personally loved a story featuring him, although I was happy that Wheaton decided to give him his own happiness at the end of the book.

As an addictive story with plenty of unexpected character development, Shadow Fire will catch from its opening chapter and leave you wanting more. Wheaton weaves a beguiling story that has me ready to devour it’s companion novel upon its release. Definitely worth a read!

Source: Sent for review by the author (Thank you Kimber!)
Format: Kindle ebook
Buy it:  Amazon | Smashwords | Barnes & Noble | Kobo |
My Recommendation: If you love fantasy with tones of romance, Shadow Fire will be PERFECT for you!
Cover: I think the cover is stunning, although I think the cover model books a bit like Demi Lovato
Will I read sequel/continue with series: Yes!