Book Shelf: While We Run (When We Wake #2) by Karen Healey 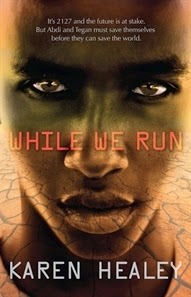 Abdi Taalib thought he was moving to Australia for a music scholarship. But after meeting the beautiful and brazen Tegan Oglietti, his world was turned upside down. Tegan's no ordinary girl - she died in 2027, only to be frozen and brought back to life in Abdi's time, 100 years later.

Now, all they want is for things to return to normal (or as normal as they can be), but the government has other ideas. Especially since the two just spilled the secrets behind Australia's cryonics project to the world. On the run, Abdi and Tegan have no idea who they can trust, and when they uncover startling new details about Project Ark, they realise thousands of lives may be in their hands.

A suspenseful, page-turning sequel to When We Wake that will keep readers on the edge of their seats and make them call into question their own ideas about morality - and mortality, too.

While We Run is the sequel to Karen Healy’s When We Wake and is a fast paced and action packed follow up that sees Healy continue to evolve the storyline and push the series forward.

The first book in this series, When We Wake was a really enjoyable read for me. Set in a futuristic and almost apocalyptic Australia, this series follows Tegan Oglietti, a teenage girl who died, was cryogenically frozen and then brought back to life in 2027, as well as Abdi Taalib, a Djibouti citizen on scholarship to Australia whose world is turned upside when he meets Tegan. Together these two uncover a shocking government conspiracy that sees them on the run and fighting for their very lives.

While We Run was a very fast paced follow up to When We Wake. Healy introduces the next stage in her storyline, with While We Run a very different tale than its predecessor. Whilst When We Wake introduced us to the characters and their circumstances and this futuristic Australian world, centering around Tegan’s adjustment to this new world she finds herself in, When While Run instead focuses heavily on the political events and the impact secrets kept by the government have had on their people.

Unlike the first book which was told through Tegan’s eyes, While We Run is detailed from Abi’s POV and sees Hearly explore a very intriguing concept within While We Run. Featuring an Australia that has closed off its borders to refugees; Healy explores this contemporary topic with a subject matter that is very much a focal point in our world today. Healy makes you think; about morality and mortality with the government in this series exploring different options including cryogenics and immigration to distant planets in an effort to solve the overpopulation and lack of resources problems they seem to be incurring.

Our characters lives have changed drastically in While We Run, and as the reader being inside Abdi is a big change of pace from the first book. While Tegan was brash and led with her emotions, Abdi is practical and thinks with this head rather than his heart. Careful and calculated, Abdi has been shaped and moulded by his mother to be the perfect little future political candidate of his home land of Djibouti. Although he is known as a “thirdie” Abdi is actually quite cultured and pampered, and his intelligence and charm have gone a long way to help him during his time in Australia. Until he and Tegan found themselves in the clutches of the Australia government, paraded around and forced to sell The Ark Project as everyone’s best solution that is.

Thanks to the extreme torture at the hands of his handler Diane, both physically and mentally, Abdi is now a very different person and truly struggles at times. It was refreshing being inside Abdi’s head but it also really made me think as his “selfish” desire to just get home to his family warred with those around him who really just wanted to continue fighting as part of the Save Tegan Program. Just what is selfish? Right and wrong seem to blur as lives are put on the line and the lives of some appear more important than the lives of the others.

Healy does a good job in keeping this book moving forward. A lot happens and the action was very detailed, gritty and at times even gory. All the characters we’ve come to love from the first book are back with Tegan and Abdi joined by Bethani, Joph, Sergent Washington and Dr Carmen on their dangerous journey to bring government conspiracies to light with as many casualties as possible.

Karen Healy ends this chapter of the series well, and based on what we’ve seen so far, though I have no idea where the story will go next, I just know it will be as explosive as the first two books. Action packed with startling revelations and just the perfect touch of romance, When We Wake is a great read!

Source: Sent for review by Allen & Unwin (Thank you Lara!)
Format: Paperback
Buy it: Bookworld | The Nile | The Book Depository | Amazon
My Recommendation: Dystopian fans looking for something political based with sci-fi mixed in will enjoy this!
Cover: It fits perfectly with the other.
Will I read sequel/continue with series: Yes