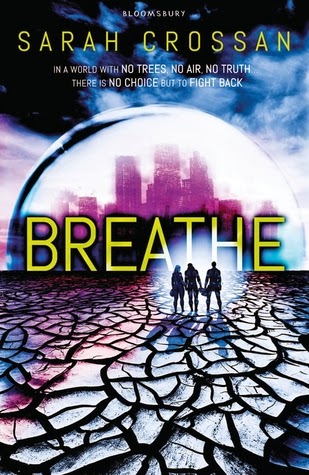 When oxygen levels plunge in a treeless world, a state lottery decides which lucky few will live inside the Pod. Everyone else will slowly suffocate. Years after the Switch, life inside the Pod has moved on. A poor Auxiliary class cannot afford the oxygen tax which supplies extra air for running, dancing and sports. The rich Premiums, by contrast, are healthy and strong. Anyone who opposes the regime is labelled a terrorist and ejected from the Pod to die.

Sixteen-year-old Alina is part of the secret resistance, but when a mission goes wrong she is forced to escape from the Pod. With only two days of oxygen in her tank, she too faces the terrifying prospect of death by suffocation. Her only hope is to find the mythical Grove, a small enclave of trees protected by a hardcore band of rebels. Does it even exist, and if so, what or who are they protecting the trees from? A dystopian thriller about courage and freedom, with a love story at its heart.

Breathe by Sarah Crossan is a very vivid and enjoyable dystopian novel that has the all the elements to keep you entertained and wanting more. Danger, excitement, romance and friendship all weave together to create a tale that will have you early turning pages, lost amongst the riveting story and dire stakes.

Featuring a world where the lack of oxygen, caused by the destruction of all the trees across the earth has left the atmosphere seemingly inhabitable, the world’s population reside in pods and people have to pay for oxygen to simply survive. Individuals live categorized as either Premiums--those of wealth and power, or Auxilaries--people of lower importance who struggle live under the restraints of the government and the ministers who oversee their society; even if they’re not really aware of it.

Personally, I really enjoyed Breathe. It’s taken me a little while to read it, considering the sequel Resist is out already, but I honestly found it to be a good, honest read and I was impressed with what Sarah Crossan has brought to the table with this book. Crossan explores the vivid possibility of what would happen to the world with the loss of oxygen in this futuristic story where a small band of rebels fight to restore some semblance of normality.

To begin with, the setting Crossan has created with Breathe is perfect! She hits every nail on the head in detailing this dangerous, deceptive world where politicians and army generals manipulate to suit their own agendas and normal people have no idea of what is going on right under their noses.

Breathe follows three individuals; Alina, a Resistance member and one of the few people who fight for freedom and a better future, Quinn, a Premium and young man of social standing who has no idea of what’s going on and Bea, a Auxilaries and Quinn’s best friend, who is secretly in love with him and who wants nothing more than to better herself and the lives of her family.

Told through the varying POV’s of Alina, Bea and Quinn, I really liked what Sarah Crossan has done with her main characters in this book. All three are very different and definitely bring different elements to the story, but all are easy to follow and quite likable. It was so easy to read a chapter from, say, Alina’s POV and then have the next one be in Bea’s, then go to Quinn’s and then back to Bea’s for a little while. Crossan has written it so it just flowed perfectly and allowed the story to really showcase all aspects.

The minor characters also complimented the story well; Crossan adds various small characters to the story that I just loved meeting and seeing—I’m taking about you Maude Blue! Sarah Crossan also pleased me by adding the prospect of a love triangle, something I’ve very, very over, but then resolving the issue very quickly; in a different way then I first expected too, but in which I was thrilled about seeing though.

Honestly, I think Sarah Crossan has penned a great start to her new duology with Breathe. It follows a great cast of characters, in an engaging setting and leaves me ready for more! As far as dystopians go this was an enjoyable read and I’m ready for more!

Source: Sent for review by Bloomsbury Australia (Thank you Sonia!)
Format: Paperback
Buy it: Bookworld | The Nile | The Book Depository | Amazon
My Recommendation: Beth Revis, Amy Kathleen Ryan and Veronica Rossi fans will enjoy this!
Cover: I think it's very pretty and represents the book perfectly!
Will I read sequel/continue with series: Yes!