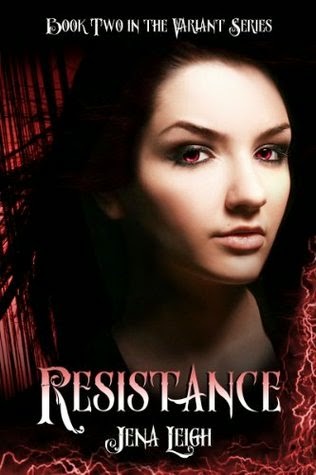 Alexandra Parker might be the most powerful Variant the world has ever seen—but even that won’t get her out of finishing her junior year of high school.

The challenge of keeping her abilities under wraps during class is daunting enough, but throw one surly, sandy-haired Jumper into the mix, and things can get downright complicated.

Declan’s new job? Watch over Alex while she’s at school and do everything in his power to keep her from losing control. But as sparks of every kind begin flying between Alex and her new bodyguard, she's left feeling more unstable than ever.

When avoiding her abilities results in a surprise visit from her parents’ killer, Alex’s worlds collide with a bang that nearly levels Bay View High.

With her freedom now squarely in the Agency’s crosshairs, Alex will be faced with the fight of her life… and a decision that could forever alter the course of her destiny.

Resistance is the second book in Jena Leigh’s thrilling Variant series and is as equally as addictive as the first book in the series, continuing to excite with its appealing characters, action based story and riveting romance.

I have to say, I really, really like this series. It’s just plain fun to read with its fantastic character dynamic and chemistry. Honestly, this is just good reading. I will admit there didn’t seem to be the same set, and driven, storyline that we had in the first book, what with Alex learning who she was and all in Revival, but Resistance was still highly entertaining and a great read.

Told through the various POV’s of our main characters, Resistance gives us a well rounded look into their hearts and minds. I’m already head over heels for the great array of characters that feature in this series but Leigh keeps things interesting by introducing new individuals and new developments that are obviously meant to shape the evolving storyline—something that does not go astray as questions are answered at the same time more are raised.

Our main heroine and leading lady Alex continues to be great to follow, and she continues to grow. Alex has a lot to face in this book; both about herself and her purpose to the Variant society. I really like Alex and enjoy seeing her better herself. She continues to be easy to follow and relatable.

The other characters also continue to shine, with Declan in a bodyguard role of sorts and his sister Kenzie enrolling in Alex’s high school to help protect her after the events of the previous book. Cassie is there as Alex’s best friend and this time she enjoys an ever growing relationship with Aiden. Nate and Brian continue to harbor secrets that I for one am getting quite anxious over and new characters add new difficulties. Personally I love all these guys and they way they compliment each other. They’re a family through and through and Leigh does a great job showcasing this.

Jena Leigh continues to build on Alex’s relationship with Declan, something I just adore, however an unexpected enemy manipulates one of the two, managing to shatter the trust the two of them share. I was gutted to see these two begin to soar as a couple, only to be struck down once more. If the possibility of a love triangle between Alex, Declan and Nate wasn’t enough, we now have to contend with others manipulating them. Alex and Declan have such a great chemistry and the sexual tension is off the charts; I really just want to see them act upon, and cement, a relationship--although after the ending of Resistance, I have a feeling Jena Leigh has other things in mind.

The ending of this book is quite the cliffhanger! Jena leaves us all gaping and wondering what the implications of the final few pages could possibly mean. With some story developments obvious set-ups for the bigger picture, I personally can’t wait for the next instalment in this series. Resistance will leave fans desperate for more and ready to devour the next book stat!

Source: Sent for review by the author (Thank you Jena!)
Format: Kindle ebook
Buy it: Amazon (Kindle) | Amazon (Paperback) | Barnes & Noble | Smashwords
My Recommendation: I think fans of The Mortal Instruments and who appreciate fantastic character dynamic will adore this!
Cover: I think it's stunning; perfect with the first one
Will I read sequel/continue with series: After that ending? Oh, hell yes!