Welcome to my stop in the Forged In Fire by Trish McCallan blog tour presented by SupaGurl Tours!

Today I have author Trish McCallan on the blog talking about how she's able to write real, believable heroes thanks to some of her life experiences, but first lets have a little look at Forged In Fire! 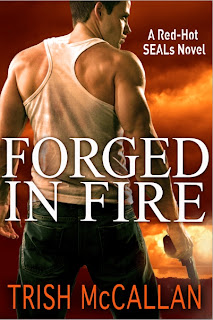 Beth Brown doesn’t believe in premonitions. But her recent dream feels too real to ignore: a commercial airliner is hijacked, and a handsome passenger is shot dead. Beth hasn’t met the mystery man in her dream; she would never forget a gorgeous face like his. But she can’t deny the bizarre connection she feels. Now awake, and unable to allow for the violence she’s convinced is impending, she races to the airport…and comes face to face with the man of her dreams.

Zane Winters lives for his job, using his uncanny psychic powers to carry out missions for elite SEAL Team 7. Yet the constant adrenaline highs can’t drown out the numbness seeping into his life as he yearns to find a woman he can trust. All that changes when he meets a beautiful stranger who sets his soul on fire—and somehow knows he’s about to die.

To thwart the global crisis the hijacking will unleash, Beth and Zane join forces. But even amid the danger, they can’t deny the powerful force drawing them together. Is it merely attraction…or destiny?


Add Forged In Fire on Goodreads!

I’ve been told I write believable heroes. Heroes who think, react and talk like actual men.

Some of my readers seemed amazed by this, and one of the most common questions I’m asked is how I’m able to portray men so accurately—when I’m, you know, a woman :) I’m pretty sure my knack for portraying men realistically, comes from where I was working between 1986 and 2001.

When I was 26, I went to work as a laborer at Alcoa’s Wenatchee Works, which is an aluminum foundry. The plant had some of the best paying jobs in the valley, and it was very difficult to get into. You had to know someone with pull in the plant to get into Alcoa back then, you also had to be extremely physically fit and you had to be male—at least in the beginning.

And then the government came along with their affirmative action and began giving the company tax breaks for every woman they hired. So the plant slowly began to hire women. I got hired on in 1986 and was the only woman out of fifty new hires that summer. I’d been warned that Alcoa was still a “Good Old Boys Club” and quite a few of the longtime employees resented the shift taking place to encourage women to apply. Very few women applied to the company and even fewer made it past the probationary periods. During my initial six months of training, I was the only woman on a crew of 100 men.

I spent 13 years at Alcoa, working beside hundreds of men, of various ages. I also spent a lot of time in the lunch room listening to the guys talk, and watching them interact.

Quite often I was the only woman on the shift, and the guys either forgot I was there, or didn’t care. They didn’t curb their language or their interaction. And I’ll tell you flat out that men act different in a group with other men than they do in mixed groups. We’d have periodic barbeque's with the crews’ families and the behavior of the guys during the mixed gatherings was so different it was hard to believe these were the same guys. Like Russ, who punctuated every sentence with ripe cursing while on the job, yet never sweared in front of his wife or kids. Or Bob, who was a wanna-be alpha male and would walk around with his shoulders pulled back and his chest out and would position himself as close to his workmates as possible when interacting. Yet at the barbeque's it was obvious his wife was the dominant one in that relationship, and Bob would stand way back with rounded shoulders and hands in his pocket.

In the lunch room the guys would throw good-natured punches, ( I accidentally walked into one of these affectionate punches once and I can tell you they HURT) they’d call each other every name in the book, insult each other’s intelligence, sexuality, relatives, and anything else that might get a rise. And never, not once, did I ever hear these guys say anything touching or loving to each other, even though some of these guys had been working side-by-side for30 plus years and were the best of friends.

They showed their feeling toward each other, they didn’t express it. They showed it by working extra hours or extra shifts to cover for someone if they had an emergency. By donating entire paychecks to help workmates stay afloat while out on sick leave, by taking out their buddies to get drunk after losing a girlfriend or wife, but mostly just by being there them.

The most poignant scene I remember is one that happened on my last day. One of the older members of our team, who was nicknamed Stretch because of his height, had gone to the doctor earlier in the week and had been diagnosed with Mesothelioma, which is a fast acting, fatal type of lung cancer. At least two Alcoans had died from this within the past four years or so, so everyone knew the diagnosis was a death sentence. I didn’t expect to see Stretch back in the plant after the diagnosis, but he showed up in the lunchroom a couple of days later. Someone asked him how he was doing, and he just said “fine.” Someone else asked how much time the docs had given him and he said “weeks.” And that was all they asked him. And all he said.

Instead, the guys pushed two tables together and started up a card game—business as usual. Stretch sat in the middle with his friends pressed close on both sides and they played cards in almost total silence. Periodically broken by questions like “Do you need any help getting the yard into shape? We could get a work party together, come over this weekend.” And “So, if you’re feeling up to it, we could go grouse hunting this weekend.” Or “Are you still planning on painting the house? Do you need any help? I bet we could finish the whole thing over the weekend.”

They didn’t offer their condolences, or tell him how much they’d miss him. They just sat with him and tried to do make his life easier for the short time he had left.

I think my years of exposure to so many different men, of different ages, helped tremendously with my portrayal of my heroes. But I also have to admit that my SEALs speech patterns and slang and anachronisms come from lurking on a closed SEAL board. A friend, who was dating a SEAL, got me admitted to the board so I can listen to the guys chat, but I can’t post, ask questions, or repeat what they guys say. It’s been an eye opener though and a great resource for slang :)

And one step further to making my heroes read like real men!


About Trish!
Trish McCallan was born in Eugene, Oregon, and grew up in Washington State, where she began crafting stories at an early age. Her first books were illustrated in crayon, bound with red yarn, and sold for a nickel at her lemonade stand. Trish grew up to earn a bachelor’s degree in English literature with a concentration in creative writing from Western Washington University, taking jobs as a bookkeeper and human- resource specialist before finally quitting her day job to write full time. Forged in Fire came about after a marathon reading session, and a bottle of Nyquil that sparked a vivid dream. She lives today in eastern Washington. An avid animal lover, she currently shares her home with three golden retrievers, a black lab mix and a cat.


I'd like to thank both Heather and Trish for putting this tour together and allowing me to be a part of it! Don't forget to stop by the tour post to find the complete tour schedule!