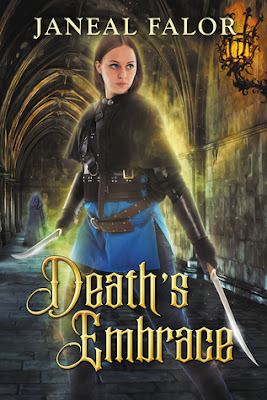 Death’s Embrace is the third instalment in Janeal Falors brilliant fantasy series Death’s Queen and is another thrilling, addictive and action packed read that will captivate you until the final page.

Having been forced to make terrible choices to save someone she loves, Queen Ryn is now trying to make it up to her people and regain their favour. Though her decisions are hard, Ryn is determined to do the best for her people and help make their lives easier; even if it means angering minorities and changing laws that have been in place for centuries. Stepping outside the palace, Ryn and her most trusted guards and advisors journey throughout Valcora meeting the people and visiting the kingdom, but as rumours of Ryn’s old mentor Daros circulate, Ryn will have to be more careful than ever as there are those that would love to see her throne taken from her. And this time her enemies are closer than ever…..

Janeal Falor is back with another fantastic fantasy tale in the form of Death’s Embrace. Picking up where the previous novel left off, Death’s Embrace was well told, depicted and paced. Main character Ryn continues to be a joy to follow and author Janeal Falor weaves action, deception, danger and forbidden romance into the story wonderfully. I love seeing all the elements come together and I find myself eagerly reading along to see what’s going to happen to Ryn next.

This series really is thrilling and features an honestly kind hearted, but kick-ass heroine capable of taking care of herself and determined to do the right thing by those she rules over. Ryn may have risen to her position as Queen when she tried to end her own life, but she has quickly begun to take everything on board and is now making decisions based on wanting to improve the lives of her people. And boy do you have to love her for it…..Ryn is genuinely a good person despite how she was raised and is winning me over more and more, even though I’ve loved her from the very beginning.

Throughout the series, former assassin Ryn has struggled to trust and accept people close to her. A highlight of the series is of course her forbidden love for Nash, but I also adore seeing her begin to trust others including Inkga, Jem, Julina and Jakka. It’s delightful to witness Ryn interact with those who want to protect her and nurture her as Queen. As someone who was always alone, Ryn doesn’t trust easily so seeing her care about those closest to her has an extra special meaning.

Death’s Queen was a highly enjoyable novel. Third in what will be a series of four books, with the last one to come next, Death’s Queen takes readers on an addictive journey and concludes leaving me dying to see what Janeal Falor has planned next!

Source: Sent for review by the author (Thank you Janeal!)
Publisher: Chardonian Press
Format: Kindle ebook
Release Date: February 12th 2018
Purchase: Amazon | Barnes & Noble | Kobo | iBooks
Final Thoughts: I absolutely adore this series and think Death's Queen was another brilliant installment. I can't wait for the next novel, even if it is going to be the final book.