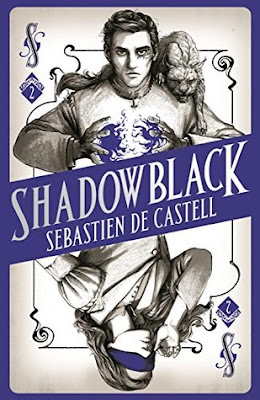 The second book in the page-turning SPELLSLINGER series for all teen, YA, adult and fantasy readers.

It's a few months since Kellen left his people behind. Now aged sixteen, Kellen is an outlaw, relying on his wits to keep him alive in the land of the Seven Sands. He misses home, he misses family and more than anything, he misses Nephenia, the girl he left behind.

Then he meets Seneira, a blindfolded girl who isn't blind, and who carries a secret that's all too familiar to Kellen. Kellen and Ferius resolve to help - but the stakes are far higher than they realise. A Shadowblack plague is taking hold - and Kellen can't help but suspect his own people may even be behind it.

Perfect for fans of The Dark Tower, Firefly, The Hunger Games and Guardians of the Galaxy.

Shadowblack is the thrilling second novel in Sebastien de Castell’s Spellslinger series and is another hilariously entertaining tale of magic, mayhem and adventure in what is a well told and fantastically paced novel!

It’s been a few months since former Jan’Tep mage Kellen walked away from his people and the life they had planned for him. Now an outlaw, Kellen and his companions, the Argosi wanderer Ferius Parfax and squirrel cat Reichis, journey through the land of Seven Sands. Surviving only thanks to his wits and occasional quick thinking, Kellen can’t help but miss his family and his old life. Yet when he meets Seneira, a blindfolded girl who isn’t actually blind, Kellen discovers shocking similarities between her ailment and his own secrets. A Shadowblack plague is effecting the people of the Seven Sands and Kellen and Ferius are determined to help them, but will the threat be too much for even them to face?

After enjoying Spellslinger so much, I was thrilled to continue on with Kellen and his story and feel that Sebastien de Castell did a brilliant job with this sequel. All the humour, excitement, wit and entertaining dialogue I loved about the first novel was evident once more. The storyline is developing even further and de Castell mixes plenty of moments of action, humour and fun into the novel. There’s so much about this series I love so far.

Kellen continues to be a solid protagonist to follow. He has a good head on his shoulders, and even as a female reader, I feel that he reads very well. I find him likable and easy to get behind as the storyline progresses. He makes me smile with his occasionally hopeless nature and I love that he’s determined to do the right thing. He’s just a genuine joy to read about.

Although, as much as I like Kellen, if I’m honest the best part about this series for me is Reichis. He steals (pun totally intended!) the show every scene he's in and I just adore the thieving, murderous little fur ball! He constantly makes me smile and I think he and Kellen are developing a truly strong bond as the series progresses. Not that Reichis would ever admit it!

Fast paced, exciting and riveting fantasy, Shadowblack was a brilliant follow up to its predecessor, easily as good as the first novel and leaves me dying to see what Sebastien de Castell has in store for his characters and his readers next!

Source: Won from Allen & Unwin Teen's Facebook page (Thank you guys!)
Publisher: Hot Key Books
Format: Paperback
Release Date: October 5th 2017
Purchase: Bookworld | Booktopia | The Book Depository | Amazon
Final Thoughts: I genuinely loved this book as much as the first and can't wait until the next one is released!