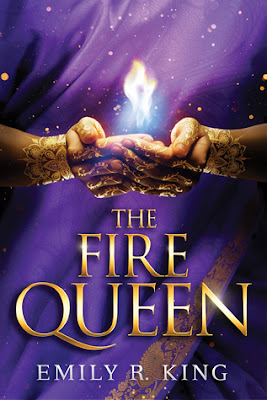 In the second book in The Hundredth Queen Series, Emily R. King once again follows a young warrior queen’s rise to meet her destiny in a richly imagined world of sorcery and forbidden powers.

Though the tyrant rajah she was forced to marry is dead, Kalinda’s troubles are far from over. A warlord has invaded the imperial city, and now she’s in exile. But she isn’t alone. Kalinda has the allegiance of Captain Deven Naik, her guard and beloved, imprisoned for treason and stripped of command. With the empire at war, their best hope is to find Prince Ashwin, the rajah’s son, who has promised Deven’s freedom on one condition: that Kalinda will fight and defeat three formidable opponents.

But as Kalinda’s tournament strengths are once again challenged, so too is her relationship with Deven. While Deven fears her powers, Ashwin reveres them—as well as the courageous woman who wields them. Kalinda comes to regard Ashwin as the only man who can repair a warring world and finds herself torn between her allegiance to Deven and a newly found respect for the young prince.

With both the responsibility to protect her people and the fate of those she loves weighing heavily upon her, Kalinda is forced again to compete. She must test the limits of her fire powers and her hard-won wisdom. But will that be enough to unite the empire without sacrificing all she holds dear?

The Fire Queen is the sequel to Emily R. King’s fantastic debut novel, The Hundredth Queen and is a stellar follow up to its predecessor, drawing readers further into a lush and dangerous desert world that’s as appealing as it is threatening…..

Having only just managed to escape with her life, warrior queen Kalinda finds herself forced into exile at the hands of the warlord who has invaded the palace of her late husband, Rajah Tarak. Haunted by dreams and memories of the tyrant she was forced to marry, Kalinda and those closest to her--including her enemy-turned-friend Natesa and the man she loves Captain Deven Nirik, now disgraced and striped of his rank for his actions against the rajah--seek asylum and assistance from one of the Kingdom’s neighbouring Sultan’s. Kalinda hopes to find the heir to the empire of Tarachand, Prince Ashwin and restore him to his rightful place on the throne, but when the only way to do so includes participating in another brutal tournament, can Kalinda once again harness her fears or will enemies bring Kalinda once again to her knees?

Taking place almost two months after the conclusion of The Hundredth Queen, The Fire Queen picks up with a flourish; exploring new aspects of the desert landscape Emily R. King introduced her readers to in the first novel. The Fire Queen was as well paced as the first novel and I loved seeing the characters from the first novel back, as well as new friends and allies for Kalinda and Deven.

One of the biggest changes King brings to this second novel is the alteration of the way in which the novel unfolds. After following Kalinda for the whole duration of The Hundredth Queen, I was both surprised and then delighted when I began reading The Fire Queen and discovered that the story was now told through both Kalinda and Deven’s alternating POV’s. Considering the nature of The Fire Queen and the fact Kalinda and Deven spent a large portion separated from each other, following Deven as well helps offer a better rounded version of the story than if we were still following Kalinda only. It also didn’t hurt to have a glimpse into the mind and heart of our male lead and love interest.

Personally I think this series is shaping up very well. Kalinda continues to grow into her powers and her capabilities and remains a strong heroine to follow. I enjoy the relationships she has with the other characters and the way they interact with each other. I think Natesa and Yatin are sweet and really want more of Brac. I’m still on the fence with my feelings for Prince Ashwin, although I am fully behind Deven and Kalinda’s relationship.

The Fire Queen is filled with plenty of twists and turns you won’t necessarily anticipate. Emily R. King ends The Fire Queen with a story shaping development that leaves the characters once more facing a massive challenge. Personally I can’t wait until the third novel releases and will be looking to read it as soon as possible!