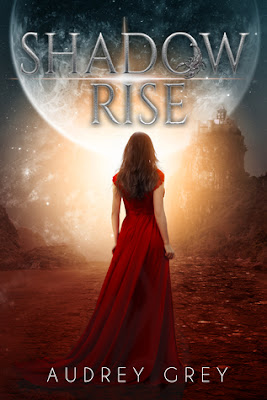 One rash decision during the Shadow Trials led to unspeakable horrors that left innocents dead, friends injured and hunted by the Empire, and Maia Graystone imprisoned in the Tower at the Archduchess’s mercy.

Unsure if Riser Thornbrook survived, Maia must find a way to battle the Empire from within its own walls and escape so she can fulfill the promise to her father and stop the asteroid. But when she breaks free and joins Nicolai's Rebel army, she discovers she’s been branded a traitor. With war between the Rebels and the Empire looming, old alliances shifting, and suspicion hanging over her head, she must fight in the Rebel Blood Courts—and win command—to regain their trust.

Only problem is, first she has defeat the reigning champion, someone she knows all too well. Will Maia’s emotions lead to her defeat, or will she rise up and claim her victory?

Shadow Rise is the sequel to Audrey Grey’s debut novel Shadow Fall and is a superb follow up to its predecessor that is filled with action, danger and thrilling moments of excitement and romance.

Maia Greystone made one rash decision that left her a prisoner of the Empire and dozens of innocent people dead. At the mercy of a cruel overlord, Maia’s only hope is escaping her prison and joining the Rebel forces determined to overthrow the Emperor. Yet when she eventually reaches the Rebels, Maia finds herself labelled a traitor. The two people she cares for more than anything in the world either do not remember her or want nothing to do with her and those around her ostracize her for her believed loyalty to the Empire. The Rebels plan to wage war against the Emperor, but with Maia sure there is another way, will she have the courage to fight for the Blood Throne to take control of the Rebels? Or will Nicolai and his army bring the world to its knees in its thirst for revenge?

Having adored the first book so very much, I was once again entranced with Shadow Rise. I very much enjoy this perilous dystopian world author Audrey Grey has created and can’t help but get lost in it. After loving the first book so, I was stoked to jump back in and have appreciated seeing new elements introduced and explored in this sequel, including the Fienian Rebels.

From the very beginning, I have found myself adoring the strong willed and tenacious heroine featured in this series and the complex world she inhabits that is full of danger; both in the form of the political and monarchical uprising that is going on and the looming threat of the asteroid that is on a collision course with Earth and is getting closer every day. Audrey Grey seems to have taken all my favourite elements of dystopian/apocalyptic novels and woven them together to give us Shadow Fall—and by golly is it brilliant! Personally, I just love it.

There’s so many fantastic characters in this series, including a lot of new ones in the form of Rebel members we meet in Shadow Rise. Maia finds herself some true friends in Teagan and Lash who often made me smile throughout the story and who were honestly likable and fun. Riser continues to be my guy (I’ll always be Team Riser) and Maia is still the incredibly strong willed and likable character we met in the first book.

There’s plenty of action, sizzling chemistry and danger fuelled moments within Shadow Rise. Alliances form and war is imminent with Audrey Grey ending Shadow Rise is excellent fashion. Highly entertaining and so addictive, I can’t wait to get my hands on the next book as soon as it’s released!