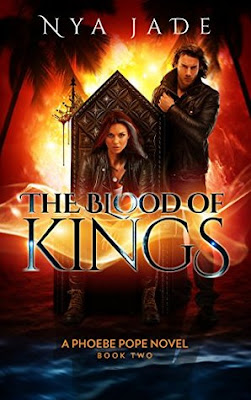 The thrilling, un-put-downable sequel to The Year of Four.

According to the press, Phoebe Pope and teen movie star Colten Chase are no longer an item—which is just how the happy new couple like it. And yet there’s trouble in paradise . . .

Phoebe is haunted by dreams that show her things she can’t possibly know about—including a pact between Colten and a wanted assassin. In the daylight, she struggles to keep a newly emerging power hidden, even as her hands itch to wield it.

Meanwhile, in the wake of their escape from a Vigo crèche, Phoebe and her fellow Hyphas study under lock and key at the Campus Below. As the foursome wait to see who among them will fulfill the prophecy, someone dear to Phoebe is kidnapped by a powerful Vigo determined to use her to spy on the Shaper royalty. When the Hyphas are called to the Royal Court, Phoebe refuses to heed warnings of imminent danger for she will do whatever it takes to rescue her loved one.

But once at court, nothing is as it first appears. A sinister force controls some royals, while others whisper behind closed doors about forbidden alliances. And as Phoebe draws on her courage to complete the task set by her enemy, she makes a startling discovery—one that upends her father’s memory.
With dangerous conspiracies surfacing, Phoebe must uncover what the Royal Shapers really want from her, and decide whether there’s room for Colten in her unraveling life.

The Blood of Kings is the second novel in Nya Jade’s Phoebe Pope series and is a thrilling sequel that once again draws readers into an exhilarating tale of paranormal, danger and excitement.

After the events of the first novel, Phoebe Pope continues to study and train at the Campus Below while trying to keep a normal profile at the Campus Above. Phoebe and her boyfriend Hollywood heartthrob Colten Chase are now believed to be broken up by the paparazzi and press, allowing the loved up couple to keep their relationship to themselves as well as continue to keep their secrets hidden between them and no one else. Then Phoebe finds herself once more then victim of a Vigos attack and soon she and her fellow Hyphas are invited to the Royal Court to mix amongst Shaper royalty and meet the reigning Monarch. Yet no one is who they seem, and there are sinister forces lurking at court with political alliances changing and the Hypha’s abilities only becoming stronger every day.

As this second novel comes to an ending with a startling development, I have to say how much I’m coming to love this series! I literally read the first two books one after another and think things are only getting better with the turn of every page. Author Nya Jade has created an alluring world and sets the series with a fantastic tone that is addictive and excitement. There’s a lot going on and I’m loving following Phoebe and the other characters as they discover who they are and what they can do.

I will be honest; I do see some similarities between Richelle Mead’s Vampire Academy and this series—the four elements with a special and almost unheard of fifth element, the royal aspect of the Shaper race as well as that of the Royal Court—but I find that Nya Jade also adds a lot of unique and different elements to the series that give it its own personality and flair. I love the idea of Ghosting and using bees as a means of communication and of course all the twists and turns I don’t think I ever see coming.

I’ve come to learn after two books that motivations aren’t always what they seem and friends aren’t always friends. People are manipulated and secrets kept with lives in danger and not everyone guaranteed to survive. I love Phoebe and Colten and their friends and am shocked by some of the intense developments and moments within The Blood of Kings. They were spectacular!

This series has been shaping up incredibly and just gets better with every instalment so far. I’m very invested in Phoebe’s journey and cannot wait to see what Nya Jade has in store for her next. The ending of The Blood of Kings was thrilling and opens up so many more possibilities I’m dying to discover!

Source: Sent for review by Dog Eared Publicity and the author (Thank you guys!)
Publisher: Dreamwell Publishing
Format: Kindle ebook
Release Date: April 14th 2017
Purchase: The Book Depository | Amazon | Barnes & Noble
Final Thoughts: This sequel was as easily as good as, if not better than it's predecessor and I can't wait until Nya Jade releases the next novel in the series!