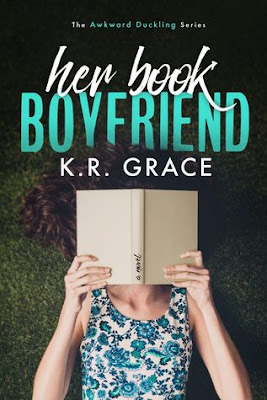 She believes the secret to love is in the tropes of her favorite romance novels. He’s the best friend prepared to prove her wrong.
Then comes the bet.
If she can’t land a boyfriend for prom by recreating the ten popular tropes in her favorite romance author’s books, she has to go to the prom with her.
The glitch?
They’ve been close their entire lives. He’s the rock god and school legend, while she’s the brainy sidekick who does all his dirty breakups. Thus, finding a guy who doesn’t think they’re already an item is going to be a lot harder than she thinks.
Will she land the book boyfriend of her dreams? Or will she be forced to go to prom with her best friend.
The truth is in the pages.

Her Book Boyfriend is K.R. Grace’s latest release and is a delightfully charming contemporary romance that is full of entertaining moments, endearing romance and sweet moments of true friendship.

Macey Greere and Camden Davis have been best friends since they were toddlers. Cam is the rock-star player who runs through a slew of girls and Macey is the diligent best friend who lets them down when he undoubtedly tires of them. High school graduation is nearing and Macey wants to experience a bit of romance herself, so she sets out to follow all the tropes found in her favourite romance novels in an effort to find love. Cam is adamant that she won’t land a boyfriend that way and so a bet ensues. If Macey can’t find love using the steps in her novels, she’ll accompany him to prom. Macey is determined to secure herself a guy, and prove Cam wrong in the process, but as things don’t quite go as plan, will Macey admit defeat? Or is she about to find that the perfect boyfriend was closer than she thought the whole time?

From beginning to end, I found Her Book Boyfriend to be a really sweet and easy to read novel. Though undoubtedly predictable, Her Book Boyfriend manages to be a quick, highly entertaining YA that charms you with its quirky characters and charming friendships. Featuring a best-friends romance, Her Book Boyfriend unfolds through Macey’s POV and will appeal to book lovers who have always wondered if finding love is as simple as they make it sound in books.

Macey was an intelligent, sharp individual who embraced her intellect and was a lover of books; something that allowed me to emphasise with her as a fellow book lover myself. Personally I think Macey’s approach to landing a boyfriend was somewhat superficial and unnecessary, but I highly enjoyed watching her stumble along with each encounter as she attempted to find someone she wanted to be with.

It really was a case of seeing what was before your eyes all along with Her Book Boyfriend. I think it was safe to say heading into the novel it’s almost guaranteed that Mace and Cam will end up together by the end of the story, but I was surprised to see how long it took for them to actually cross over to more than friends. Even though it’s obvious there’s something there, the fact it took until the final few chapters for something to really occur almost made the ending feel too rushed in my eyes.

That being said, I really did enjoy this story. Macey and Camden had a great bunch of friends and I loved that the author includes so much family interactions with their families as well. Overall, Her Book Boyfriend was a fun and flirty read that was highly addictive and every enjoyable reading!

Source: Sent for review by publisher via Netgalley (Thank you guys!)
Publisher: Published independently
Format: Kindle ecopy via Netgalley
Release Date: August 25th 2017
Purchase: Amazon | Kobo
Final Thoughts: This book was just plain fun from start to finish--can't wait to see what K. R. Grace does next with this series!