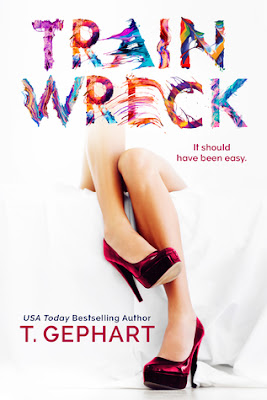 “No passion, no emotion, no originality—a train wreck of epic portions.”

Those were the words to describe Eve Thorton’s exhibition. Not even a fine arts degree from Yale or her daddy’s bank account could save her from the scathing reviews. And failure was a word Eve would never be comfortable with. Not even close.

Plotting the demise of every critic who’d written her off was her first instinct. But that would come later. Instead, she would show them that she wasn’t a bored socialite with more money than talent.

She would prove everyone wrong, and she wasn’t afraid to get her hands dirty. But when her journey for redemption crashed headfirst into Josh Logan, the sexy, talented tattooist from Queens, getting her hands dirty took on a whole new meaning.

Josh was everything Eve wasn’t, translating on skin what she couldn’t onto her canvas. All she had to do was convince him to share his jaw-dropping brilliance, and help her—seeing him naked—a bonus. Then she could go back to her regular life, vindicated.

It should have been easy. Pity her plans had a habit of derailing.

Train Wreck is Aussie author T. Gephart’s latest release and is a sensual and downright fun romance with charismatic characters and a delectable storyline that definitely entertains.

Manhattan alum Eve Thorton’s life changes unexpectedly when two disastrous things happen in one night; first Eve’s art exhibit is met with harsh scrutiny and the critics are as cruel as they come, calling her out for everything and then she returns home distraught and looking for comfort only to find her boyfriend with another woman in their apartment. Kicking the bastard out is the first thing on Eve’s to-do list, then she sets out to prove to her critics that she’s more than just a talentless socialite with daddy’s money. An unexpected referral sees Eve heading to a shop in Queen’s where a tattooist is making a name for himself with his stunning tattoos. Eve feels Josh Logan may be the exact thing she needs to get her inspiration back and is determined to learn his secret. Hoping to shadow him, Eve isn’t prepared for the instant attraction she feels when she meets the sexy Josh in person, but having just come from a relationship and trying to prove herself in the art world, beginning a relationship with Josh wouldn’t be the best thing. Yet with inspiration and talent heating up the shop, will Eve and Josh’s own heat lead to something more?

Train Wreck was a really easy, enjoyable novel to read. A solidly told NA, unfolding through Eve and Josh’s varying POV’s, Train Wreck featured all the elements that make a saucy read; likable characters, sexy chemistry, humour, wit and charm, and it all worked very well together. Even my fears about Eve and Josh’s relationship seeming to come on too fast after Eve’s recent breakup were unfounded and T. Gephart managed to capture the perfect balance and pace in my eyes.

As the main two characters within the story, I did like both Eve and Josh. Heroine Eve is a capable, confidant woman, who, even though she comes from money wasn’t in any way pretentious. She was sharp and cheeky at times and was willing to take a chance to try and save her career. Josh was a relaxed, laid back individual who was very supportive and sensible. Honestly, you just can’t fault Josh as a character. He was well balanced; cool, sexy and actually a good guy.

Train Wreck is very fun and flirty, with some hot sex scenes and an electric dynamic featured with Eve and Josh’s budding romance. T. Gephart wrote their relationship perfectly with a building attraction that developed into something very sweet but thrilling.

Ending wonderfully, the only thing I ask is that T. Gephart please give Dallas a story in the future as I thought he was fabulous character and definitely deserves his own tale!

Source: Sent for review by Give Me Books and the author (Thank you guys!)
Publisher: Published by author
Format: Kindle ebook
Release Date: July 10th 2017
Purchase: Amazon  | Barnes & Noble | Kobo
Final Thoughts: Thoroughly enjoyable, I really hope T. Gephart gives Dallas his own story down the track and will keep my eye out on what she releases next!