Book Shelf: The Darkest Torment (Lords of the Underworld #12) by Gena Showalter 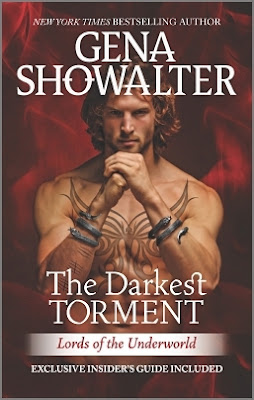 Can Beauty tame her Beast?

Driven to his death by the demon of Distrust, Baden spent centuries in purgatory. Now he's back, but at what cost? Bound to the king of the underworld, an even darker force, he's unable to withstand the touch of another and he's quickly devolving into a heartless assassin with an uncontrollable temper. Things only get worse when a mission goes awry and he finds himself saddled with a bride just not his own.

Famed dog trainer Katarina Joelle is forced to marry a monster to protect her loved ones. When she's taken hostage by the ruthless, beautiful Baden immediately after the ceremony, she's plunged into a war between two evilswith a protector more dangerous than the monsters he hunts. They are meant to be enemies, but neither can resist the passion burning between them and all too soon the biggest threat is to her heart.

But as Baden slips deeper into the abyss, she'll have to teach him to love or lose him forever.


The Darkest Torment is the 12th novel in Gena Showalter’s brilliant Lords of the Underworld series and this time features recently returned from the dead Baden, former keeper of Distrust and the woman set to bring him to his knees.

Tired of the endless war and torment Baden, keeper of Distrust gave in to a moment of weakness and allowed a Hunter to behead him. Centuries passed and Baden remained in purgatory, his only companion the woman he and his friends betrayed by opening her box. Now Braden finds himself bound to the king of the underworld, able to be touched and to touch others in return….as long as he continues wearing the bands that bind him to Hades. Yet locked within Baden is a new dark force, turning him into a mindless assassin with an uncontrollable temper and things only become worse when his latest task for Hades see Baden kidnap a human bride who arouses desires he thought long forgotten. Determined dog trainer Katarina Joelle will do anything for those she loves, even if it means marrying a monster. Just moments after saying ‘I do” Katarina is taken hostage by a darkly tormented but beautiful stranger who interrupts the ceremony and sweeps her up into a war of powerful beings and evil creatures. Sparks fly and soon Baden and Katarina discover that even though they’re meant to be enemies, the passion between them may be too great to resist……

Gena Showalter is without a doubt my favourite author—has been for a long time. I’ll read everything she releases happily and with pleasure, but in all honesty, I don’t think I loved The Darkest Torment with the same passion I have a lot of the other novels in the series. It was still definitely a deeply sensual and sexy PNR with all my favourite characters back again, but unfortunately Baden and Katarina failed to really win me over.

Throughout the story there were a number of times when both hero and heroine got on my last nerves. Unfolding through predominantly their POV’s as well as a few strategically placed chapters through the eyes of other characters including Cameo and Gilly, The Darkest Torment sees Baden and Katarina fall in love whilst fighting their attraction to each other. I wanted to love Baden and Katarina, and while I’ll never regret reading their story as I did enjoy it for the most part, it was far from perfect.

Seeing as Baden had been dubbed the “gentleman” amongst the Lords, I was expecting someone a lot more laid back and gentler than what we got. This coupled with his desire to convince Katarina she was “weak” and “needed him” was not in any way appreciated. I understand there needs to be a balance with couples and it’s a beautiful thing when two individuals need each other and complement each other in a profound way, but with Baden and Katarina, it just was too much. Katarina fighting to prove her strength; Baden fighting to convince her she’s weak; it just didn’t work in my opinion.

As far as I’m concerned, this isn’t Showalter’s best work—and I know she can do better. I’ve read dozens of her books and never really been disappointed, so I have high hopes for the next story. The Darkest Torment sets up what I’m thinking will be the next few tales including Cameo, Gilly/William and Galen. Considering the new character Gena Showalter introduces in the form of Puck, I’m really hoping she gives fans what they want with a Gilly and William happily ever after. I forgave her for not pairing Cameo and Torin together—because YAY Lazarus, but I will be grossly disappointed if these two aren’t paired together simply for the sake of an extra book.

Despite it’s faults, The Darkest Torment is sexy and beguiling with humourful moments and plenty of twists. Cameo’s tale is up next with Lazarus and I for one can’t wait to see what Gena Showalter has in store for the Keeper of Misery next!