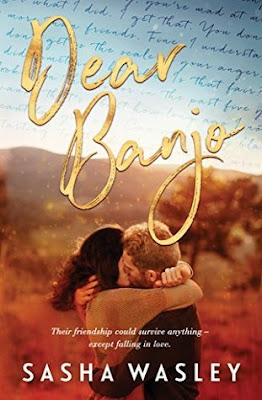 They were best friends who were never meant to fall in love – but for one of them, it was already way too late.

Willow ‘Banjo’ Paterson and Tom Forrest were raised on neighboring cattle stations in the heart of the Kimberley. As young adults, sharing the same life dreams, something came between them that Willow cannot forget, and now ten years have passed. When her father falls ill, Willow is called home to take over the running of the family property, Patterson Downs. Her vision for a sustainable, organic cattle station is proving hard to achieve. She needs Tom’s help, but is it all too late, and too difficult, to make amends?

A pile of Tom’s heartfelt letters has remained unopened and unspoken between them. Willow must find the courage to finally bring them out. Their tattered pages reveal a love story like no other – and one you’ll never forget. Dear Banjo is a wildly romantic and utterly captivating story about first love and second chances, from an exciting new Australian author.

Dear Banjo is Sasha Wasley’s first release published by Penguin Australia and is a hardy and endearing rural fiction set in the rich Australian outback that explores a delightful tale of romance, growth and the possibilities that come with finally facing your fears.

Growing up on neighbouring cattle stations, Willow “Banjo” Paterson and Tom Forrest were best friends, planning for their future until something came between them that saw Willow run for the hills. Ten years have passed since that fateful day, but when her father falls ill, Willow returns home to look after the family property. Having always dreamt of running a sustainable, organic cattle farm, all Willow’s hard work and research over the course of her academic career are about to pay off, yet putting research into action is harder than she thought. Willow needs Tom’s help, but approaching her former best friend is near impossible. Willows guilt over the multiple heartfelt letters Tom sent, left unopened and unread keep her from reaching out. Willow knows Tom poured his heart and soul into his words and she refused to even read them, fear keeping her from acknowledging what happened between them. Back in the Kimberley, Willow will find herself finally reading the letters so beautifully written and needing to decide once and for all where her heart lies. Yet with all the hurt and pain between them, can Tom forgive Willow or is their friendship destroyed forever?

In the interest of full disclosure, Sasha Wasley isn’t a new author to me. I’ve read a number of her YA novels written under the name S.D. Wasley in the past, however Dear Banjo was a completely different experience from the talented Aussie author. With the story featuring such a beautiful depth and development that only comes from a well written adult novel, Dear Banjo was an absolute joy to read and very hard to put down at times.

Rural fiction isn’t normally a genre I would seek out, but I was thoroughly entranced by the tale Wasley has created and quickly found myself lost amongst the wide open plains, hidden valleys and cattle stations of the Kimberley region in Western Australia that was so wonderfully depicted. It felt lush and vivid and very authentic. It was like being right alongside the characters as they mustered cattle and organised the day to day running of their farms.

Dear Banjo featured an independent and capable main character in the form of Willow as well as a laid back, genuine love interest in the form of Tom Forrest. They truly were solid characters with flaws, insecurities and individual personality traits. Their time apart hadn’t diminished the powerful friendship they shared and Sasha Wasley perfectly transitioned them into something more as Willow was forced to face her fears and true feelings.

Sasha Wasley packs a lot of endearing moments into Dear Banjo as well as a lot of light-hearted humour. Tom’s letters to Willow are absolutely adorable and so beautifully written. Admittedly it makes you think “what if” often as you read the tale. What if Willow had read them? What if she’d stayed? What if she’d reached out to Tom? Yet, as a novel that explores regrets, fears and even the power that comes with taking chances, Dear Banjo couldn’t have unfolded better.

Littered with a vast cast of tangible characters, including Willow’s two very different, but equally intriguing sisters Beth and Free who I hope will get their own stories, Dear Banjo is a perfectly told romance by Sasha Wasley that is enriched with the Australian spirit and entrancing until the very end.