Book Shelf: Toward a Secret Sky by Heather Maclean 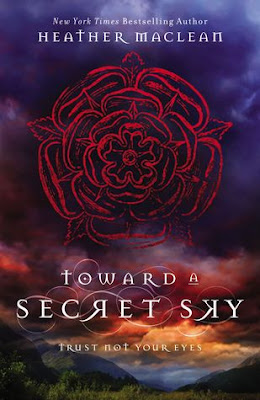 Shortly after 17-year-old Maren Hamilton is orphaned and sent to live with grandparents she’s never met in Scotland, she receives an encrypted journal from her dead mother that makes her and everyone around her a target. It confirms that her parents were employed by a secret, international organization that’s now intent on recruiting her. As Maren works to unravel the clues left behind by her mother, a murderous madness sweeps through the local population, terrorizing her small town. Maren must decide if she’ll continue her parents’ fight or stay behind to save her friends.

With the help of Gavin, an otherworldly mercenary she’s not supposed to fall in love with, and Graham, a charming aristocrat who is entranced with her, Maren races against the clock and around the country from palatial estates with twisted labyrinths to famous cathedrals with booby-trapped subterranean crypts to stay ahead of the enemy and find a cure. Along the way, she discovers the great truth of love: that laying down your life for another isn’t as hard as watching them sacrifice everything for you.

Toward a Secret Sky by Heather Maclean is Hush, Hush meets The Da Vinci Code in this fun and enjoyable YA read perfect for those who love adventure, romance and mystery.

Seventeen year old Maren Hamilton’s mother has just died, and having no other relatives, Maren finds herself moving from her home in Missouri, USA to Scotland to live with the parents of the father who died before her birth. Heartbroken and alone, Maren struggles to get over her recent loss when she receives an encrypted journal from her late mother full of clues only Maren can understand. Piecing together the clues confirm that both her parents worked for a secret organisation tied to the supernatural and both their deaths were not the accidents they appeared. Along with the mysterious and swoon-worthy Gavin who sets her heart on fire, Maren sets out to find out the truth about her mother’s death, but with Gavin hiding his own secrets, Maren is about to discover that nothing is what it seems and there’s a battle going on between good and evil that will change her world forever.

Lurching her readers straight into the thick of things, Heather Maclean details Toward a Secret Sky through the eyes of Maren, a likable and easy to follow character who has a strong backbone and a thirst for the truth. Set in the beautiful Scottish countryside, Toward a Secret Sky features a lush setting and adorable cast of characters who bring Maclean’s world to life. Personally I loved that this story was set in Scotland—I’m a lover of all things Scottish and Irish, and enjoyed being able to get a taste of Scotland through Maren’s eyes.

Without giving away spoilers, I have to say I thought it was a sweet and interesting take on the supernatural beings featured in Toward a Secret Sky. Heather Maclean features beings we’ve all doubt seen before and gives them a roguish and Scottish twist as well as giving them a nice family base with the villages and individuals we get to meet. I’m hoping this is only the first of many interactions with them and we’ll get to explore their world and hierarchy’s the in future. Seeing as how the novel ended, I can only imagine we’ll have a chance get to uncover and experience the Abbey in the next novel as well as Gavin’s people.

Full of forbidden romance and chemistry thanks to Maren’s love interest in the form of the cheeky, but sexy Gavin, Toward a Secret Sky is good solid YA reading that will entertain readers and leaving them excited to see how Heather Maclean plans to expand on the series after the thrilling ending of this first stellar instalment.