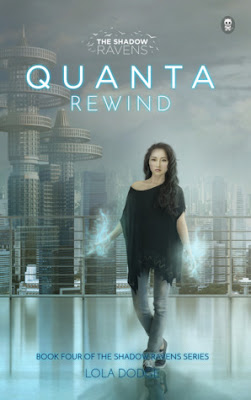 With more and more Red Helixes turning up missing or dead, the Shadow Ravens are ready to take their fight to Doctor Nagi himself.

But breaking into Alpha Citadel is no cakewalk, and Quanta isn’t so sure about this whole “teamwork” thing.

If she and the Ravens can’t learn to work together, no amount of rewinding time will save them from the inevitable.

And if the Seligo win, everyone loses.


Quanta Rewind is the fourth instalment in the Shadow Raven’s series, featuring Quanta and Altair for the third time around as they continue on their fight against Doctor Nagi and the Seligo in a fast paced, action filled and adrenaline pumping novel.
As more and more Red Helixes go missing or turn up dead, the Shadow Ravens find themselves having to take the fight to Doctor Nagi as he kidnaps those that are near and dear to them in an effort to lure them out of hiding. Breaking out of Alpha Citadel was one thing, but breaking in will be a new issue as Quanta, Tair and the other Shadow Ravens decide to launch a rescue mission to save their friends, and hoping to stop Doctor Nagi once and for all. With so many factors in play and all scenarios seeming to end in bloodshed, the Shadow Ravens are in for their most dangerous fight yet, and this time Quanta’s ability to rewind time may not be enough to save them…..
In another fast paced and enjoyable read, Quanta and Tair take centre stage again in Quanta Rewind, going up against the controlling and overzealous Doctor Nagi in an effort to save those they love. Lola Dodge writes another quick and entertaining read with Quanta Rewind. Entertaining, endearing and exciting at times, Quanta Rewind is just a solid read.
I loved seeing Quanta and Tair join Ciper, Knight, Devon and Dex once more. This series is such a fun one to read. After the first novel featuring Ciper, we've had the pleasure of following Quanta and Altair for three who novels, but really all the characters are highly entertaining to follow.
The world of the Selgio is very intriguing. Those perfect and altered genetically individuals mixing with the underground worlds of rebels and tech savvy risk takers--it's got a lot of potential. Quanta Rewind ends really well but I still want to see so much more of this world. Devon and even Tair's sister Cassie would make such great heroines to follow and I can only hope to see more of the Shadow Ravens down the track!
Highly entertaining and action packed, Quanta Rewind is another great read in a fabulous series. Definitely recommend!
Rating: