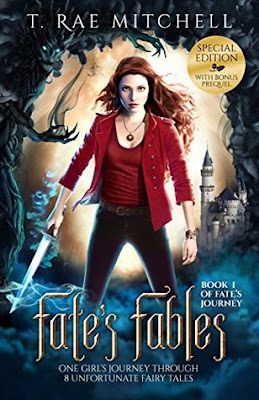 This beautifully intricate fantasy, with its feisty heroine, breath-taking action and heart-wrenching romance, will delight fans of The Lunar Chronicles and A Court of Thorns and Roses.

Reality sucks. Make-believe rocks. That's been Fate Floyd's motto for as long as she's been a fantasy geek. But now she can hardly tell what's real and what's not. She's been spelled and mysteriously trapped within a deadly fairy tale world bound by the Book of Fables. Her only way home is to travel through the book's 8 unfortunate fairy tales and change them into happily-ever-afters. And if dealing with scheming sorceresses, greedy goblins and heartless faeries isn't enough to test her sanity, there's Finn. The Scottish boy who looks like he stepped straight out of her dreams. As it turns out, make-believe isn't as fun as Fate thought it would be. The reality is, her road to freedom isn't straight, and danger lurks around every bend.

Fate’s Fables by T. Rae Mitchell is an entertaining and adventure riddled fantasy tale that is brimming with magical creatures, powerful individuals and mysterious discoveries.

Fate Floyd has always enjoyed fantasy over reality, but her love of all things fictional is put to the test when Fate finds herself sucked into a book of unfortunate fairy tales alongside a mysterious young man names Finn who is eerily familiar and the only way for them to escape the Book of Fables is for Fate and Finn to change the endings of each of the eight tales into happily-ever-afters. Each tale is more dangerous than the next and with plenty of unexpected forces determined to keep Fate and Finn from altering the tales, Fate and Finn will find themselves on a life changing journey where happiness is far from guaranteed….

T. Rae Mitchell has created a fun and adventure filled fantasy tale with Fates Fables, kicking off the Fate’s Journey series. Unfolding mainly through Fate and Finn’s POV, with an occasional different character thrown into the mix, Fate’s Fables takes you into the heart of eight very different fairy-tales, all sporting the trademark traits that make fairy-tales what they are; good versus evil, romance, monsters, magic and of course good triumphing over evil in the end.

Fate’s Fables focuses on a decent bunch of characters. Fate and Finn were easy to follow and Sithias made me smile on more than one occasion. That snakeman was certainly unique and although he had his own form of a happily ever after in Fate’s Fables, I would love to see him again down the track as his personality really shone as a highlight in the story for me.

I have to say I was surprised by the level of growth the main two characters undertake in Fate’s Fables. Fate and Finn become almost completely different people throughout the story; most especially Fate, who goes from normal teenage girl to a sword wielding, battle capable warrior from what seems like one moment to the next. Don’t get me wrong; I understand these developments within the story and seeing as large levels of time often pass throughout the novel (weeks, sometimes months are jumped) it makes sense that Fate would be drastically altered, but I still couldn’t help but feel it was a lot of change for one novel. It was the kind of growth I’d expected over the course of a series, not just the first book. That being said, Fate and Finn both go through a lot so it’s understandable they would develop because of this.

Overall Fate’s Fables was an entertaining read, perfect for anyone who loves fairy-tales and wants to jump straight into the story. I look forward to seeing what T. Rae Mitchell has in store for Fate and Finn in the next instalment!

Source: Sent for review by publisher via Netgalley (Thank you guys!)
Publisher: Original Mix Media Inc
Format: Kinde ebook via Netgalley
Release Date: August 25th 2016
Purchase:  The Book Depository | Amazon | Barnes & Noble
Final Thoughts: Unique and worth reading, I hope to read the sequel to discover what happens to Fate and Finn next.