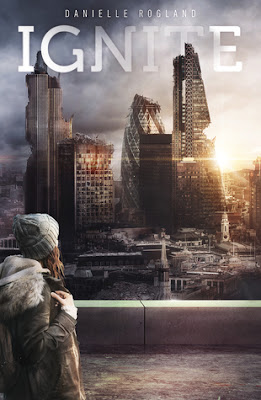 In the ruins of dystopian London, the Empire rules through fear and fire.

“Everyone knew about ‘The Flames’ and how much trouble they had caused the Empire. They were the only rebel group anyone knew of that had lasted longer than a few months without getting caught, leaving candles behind whenever they snatched somebody out of the Empire’s grasp. To get involved with people like them is stupid. So stupid.”

Ever since her parents were murdered by the empire’s agents, Jacks has been living on the street as a pickpocket trying to keep away from trouble. When she accidentally witnesses the rebel group ‘The Flames’ in the middle of an operation she is unwillingly swept up into their world, and has to decide if she’s going to go back to looking after herself or join the rebellion and help them fight for the people of London Ruins.

She knows that getting involved was stupid, but does she really have a choice?

Ignite is Danielle Rogland’s debut novel and is a harsh and vivid YA dystopian perfect for fans of Article 5 by Kristen Simmons or Disruption by Jessica Shirvington.

In a bleak and hopeless dystopian future, London is in ruins; led by a cruel dictator whose government are known for destroying all those that oppose the Empire through fire and fear. The only individuals brave enough to stand against the Empire are “The Flames”, a rebel group determined to stand up against the Empire, known for leaving candles behind whenever they have saved someone from the Empire’s clutches. Jacks is a homeless pickpocket, living alone after her gang was ripped apart by the Empire. Everyone knows there’s no one more wanted than The Flames, so when Jacks finds herself caught up as the rebels stage one of their daring rescue missions, she knows getting involved with them is suicide.  Yet The Flames are nothing like Jacks expected and soon she finds herself being drawn into the close-knit group. Having seen her parents murdered by the Empire, Jacks knows the impact of the “burners” better than anyone, but will she be able to overcome her fear and instincts to run in order to help The Flames in their fight against the Empire or will she find herself going out on her own again?

Richly depicted, Ignite introduces readers to a quite vivid, somewhat desolate dystopian London. Danielle Roglands brings her London Ruins alive and it was easy to picture the empty London Tubes, the deserted streets, the broken and destroyed structures that were once buildings and complexes and the gangly street kids and poor people that brought the story to life.

Initially Ignite started out slow for me, but I found the more I read, the more I liked the story. Ignite unfolds through four different POV’s, something I wasn’t initially expecting seeing as the description only mentions Jacks. Though Jacks is still our main protagonist, we also follow Flame members Zira, Corry and Jeremy which admittedly allows for a more well-rounded reading experience than if Ignite was told through Jacks eyes alone.

Danielle Rogland depicts Ignite well, with an aura of mystery surrounding two of the main characters origins. There’s an interesting dynamic between the characters and with trust often lost and loyalty a dangerous thing, Ignite sees the characters overcome a lot in their fight against the Empire. Danger and adventure filled, there’s not much romance to be found in Ignite; just the tiniest bit to satisfy those looking for that romantic connection between characters, but not enough to ever distract from the rest of the storyline.

Ignite features some daring escapes and even a few sad moments, but will definitely entertain readers. At this point I’m not sure if Danielle Rogland plans to make Ignite a part of the series as the story ends well enough to be left as a standalone tale, but I would definitely be interested in seeing what The Flames get up to next if the chance ever arose. Well worth a read if you enjoy gritty dystopian, Ignite satisfies in it’s adventure.

Source: Sent for review by publisher (Thank you guys!)
Publisher: Inkitt
Format: Kindle ebook
Release Date: April 5th 2017
Purchase: Amazon
Final Thoughts: A decent read, I'd be keen to discover more of this world if the chance ever arose.