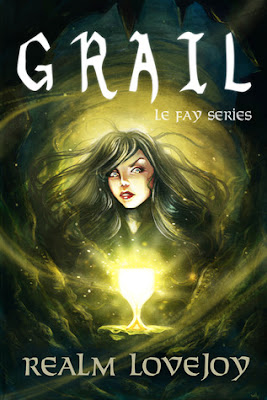 A hero has fallen, and darkness threatens a splintered Camelot. In the midst of turmoil, the last hope for the kingdom is Morgan le Fay. Morgan is both feared and revered . . . and currently in prison for treason.

In the wake of King Uther’s tragic death, the wicked Mordred is closing in on young King Arthur, and the boy king turns to Morgan for help. Freed from her imprisonment through his order, Morgan searches for a way to protect him. But she is still an outcast, and no one believes her suspicions about Mordred.

To save King Arthur, Morgan must reach the greatest Royal Relic in the world—the Grail—before Mordred does. It’s a journey that will challenge her in ways she’s never been challenged before. Traveling deep into a land of darkness, she will need to overcome the ghosts of her past to find her true power.

Can Morgan defeat Mordred and save King Arthur? And this time, can she defend Camelot without destroying herself? In this third book in the Le Fay series, author Realm Lovejoy reveals secrets from the past as Morgan’s epic journey unfolds.

Grail is the superbly action packed and exciting third instalment in Realm Lovejoy’s Le Fay series and continues Morgan’s harrowing and breathtaking adventures as she fights to protect Camelot and King Arthur from forces of evil!

Morgan le Fay is the most hated person in all of Camelot. And yet, despite being in prison for treason and acts against the crown, Morgan is the only person who knows the truth….King Arthur isn’t safe and the deadly Luminaries are determined to overthrow the boy king. Despised and scorned, Morgan is still determined to protect Arthur, even if it means accepting her role as outcast and the humiliation it brings, but when Morgan finds herself on a mission to find the greatest Royal Relic in the world, the Grail, will it be her past that is Camelot’s ultimate ruin?

Realm Lovejoy never fails to keep me highly entertained with this sensational series and Grail is absolutely no exception to this rule! Picking up where the previous book, Sword, left off, Grail depicts how far Morgan has fallen. Strong willed and passionate, our beloved heroine made difficult choices in the last book that have seen her scored and ridiculed, cast aside and now perceived as a criminal. For one such as Morgan, this affects her deeply and as Grail unfolds, it’s a daily struggle for Morgan to find the inner strength to continue on. Yet being the powerful person she is, Morgan pushes on and along the way begins to slowly rebuild her life.

I loved the way Realm Lovejoy is developing Morgan. Morgan is a highly likable character and there’s a lot going on within the series that impact heavily on her. As secrets are revealed and heritages discovered, Morgan changes and adapts and I like that she struggles, that she feels, and though she doesn’t always react the way a rational person should, it’s nice to see her beginning to accept her limitations.

Despite being the third book in a series, Grail continues to keep up the high excitement and storyline development, while managing to maintain its own individual tale focusing around Morgan’s hunt for the Grail and the threat against Arthur.

Filled with all the great Le Fay characters; Merlin, Lancelot, Arthur and more, Grail is another great instalment in a thrilling series and ends a chapter in Morgan’s journey while leaving me dying to see what happens next!