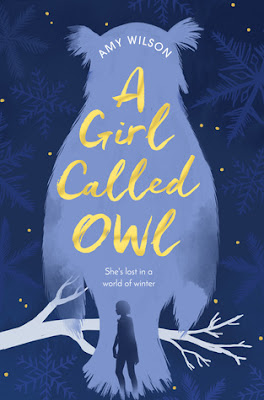 It's bad enough having a mum dippy enough to name you Owl, but when you've got a dad you've never met, a best friend who needs you more than ever, and a new boy at school giving you weird looks, there's not a lot of room for much else.

So when Owl starts seeing strange frost patterns on her skin, she's tempted to just burrow down under the duvet and forget all about it. Could her strange new powers be linked to her mysterious father?And what will happen when she enters the magical world of winter for the first time?

A glittering story of frost and friendship, with writing full of magic and heart, A Girl Called Owl is a stunning debut about family, responsibility and the beauty of the natural world.

A Girl Called Owl is a unique debut novel from Amy Wilson that details a luscious, icy tale featuring some of mythology’s most interesting characters.

Thirteen year old Owl has grown up with her quirky mother’s tales of magical lands and powerful beings. Owl knows most of her mother’s stories off by heart but never expects that the truth about her father could be as incredible as it really is. Yet when icy tendrils begin to bloom across Owl’s hands and she suddenly beings to notice strange creatures watching her every move, Owl will have to delve into worlds straight out of fairy tales if she wants to learn the truth about her new abilities and who she really is…..

A Girl Called Owl is a hard book for me to review. I think Amy Wilson had a genius thought when she decided to write a novel featuring Jack Frost and a lot of the other forces of nature we hear about upon occasion, but I don’t think the execution was as good as it could have been. A Girl Called Owl was admittedly well written, but I failed to connect emotionally with the characters and felt the novel was a slow one to read. It wasn’t bad, it just was missing something and because of this I struggled.

Perhaps it’s an age thing, but to me Owl read too young and her attitude at times grated, making it difficult for me to really care about her and what was going on in her life. I loved seeing characters such as Jack Frost, the North Wind, Mother Nature, the Lady of the Lake, the Earl of October, etc come to life, but unfortunately these magical individuals weren’t able to save the story in my eyes.

Promising, but ultimately falling flat for me, A Girl Called Owl featured a unique premise that failed to win me over but may suit the younger demographic who enjoy their tales whimsical and filled with magic.