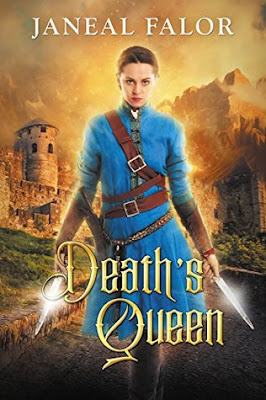 An assassin without a name, born to kill. Owned by a vicious man who refuses to call her anything but girl, she is forced to commit atrocious acts of violence. Vowing to take her future into her own hands, the seventeen-year-old decides to risk everything on one act of defiance—drinking from The Death Drink. The beverage kills most whose lips touch it—only allowing those who are destined to be royalty survive the first sip.

To the astonishment of the nation of Valcora, she imbibes it and lives, which crowns her queen. Thrown into a life of royal intrigue, she now has a purpose—to rule with the fairness she was never shown. Despite her altruistic plans, it becomes apparent that someone wants her dead. The new queen must use her training from the former life she only wants to forget in order to stay alive long enough to turn her kingdom into something she can be proud of. She’ll hold onto the crown… or die trying.

Death’s Queen is the thrilling latest release by Janeal Falor and is a sensational fantasy tale filled with danger, excitement and forbidden romance, perfect for fans of Maria V. Snyder and Sarah J. Maas!

She is known as death; a faceless assassin trained to kill, owned by a ruthless man whose cruelty knows no bounds and who pushes her to kill. Desperate and haunted, the broken seventeen year old runs away, recklessly choosing to ingest a centuries old liquid known for killing all but a select few who drink it. Dismayed to discover she is one of the few who live and crowned Queen, this nameless assassin must decide who to trust in a brand new world of politics and court life, all the while trying to stay ahead of unknown individuals who will stop at nothing to see her dead…..

As someone who considers herself a Janeal Falor fan, I have to say I went into Death’s Queen with big expectations….and I’m happy to say she delivered on them! There’s nothing about Death’s Queen I didn’t love. Honestly. Well written, paced and depicted, Falor introduces readers to a beguiling fantasy world and a main character who is easy to follow and genuinely likable.

I was easily captivated by the nameless heroine in Death’s Queen. This was a young woman who had experienced a hard life and who had been responsible for taking the lives of so many. A hasty decision to ingest a liquid that should have killed her in the hopes of death, our heroine now finds herself Queen of a nation she barely knows anything about. It was really entertaining to follow this lass. She’s brass and awkward and doesn’t mince her words, but underneath her calm and stoic exterior she’s really kind and caring. Intelligent and quick thinking, she actually cares about the people of Valcora and wants to better things for them. She’s also able to kick butt, so there’s that too—nothing wrong with a capable woman.

Exciting and often filled with great fight scenes, Death’s Queen sees a number of assassins try to take the life of our main character, and Janeal Falor keeps the mystery encompassing this all the way to the end. In a land where motives are often questionable, who can our main character trust? Aside from a truthful and honourable guard who makes her stomach flutter, our Queen will need to decide who she can rely on as well as find out who’s trying to kill her before it’s too late.

Fused with magic and featuring a storyline that makes me wonder what will happen next, Death’s Queen races to an exhilarating ending and has me eager to see what Janeal Falor has in store for the series with the second book!