Book Shelf: Teach Me to Forget by Erica M. Chapman 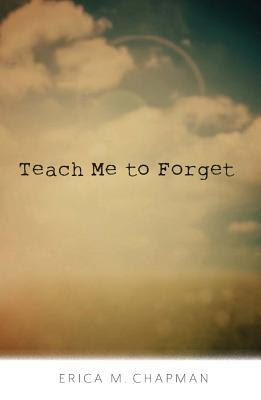 Ellery's bought the gun, made arrangements for her funeral, and even picked the day. A Wednesday. Everything has fallen into place.

Now all she has to do is die.

When her plans go awry and the gun she was going to kill herself with breaks, she does the one thing she has control over--return it and get a new one. After tormenting the crusty customer service associate by trying to return the gun with the wrong receipt, Ellery gets caught by the security guard who also happens to be someone she knows--the annoyingly perfect Colter Sawyer from her English class.

Colter quickly uncovers what she's hiding and is determined to change her mind. After confessing a closely held secret of his own, he promises not to tell hers. Ellery tries to fight her attraction to him as the shadows of her past cling tight around her, but when she's faced with another tragedy, she must decide whether her love for one boy is more important than a lifetime of pain.

Erica M. Chapman's debut novel Teach Me To Forget is a beautiful and compelling tale of emotion, honesty and powerful themes all woven together with layered characters, sassy dialogue and a swoon-worthy romance.

Ellery Stevens wants to kill herself. She's bought the gun, decided on the day and even made arrangements for her funeral. Everything is going according to plan....until the gun she uses breaks on the day. So Ellery does what any sane person would do...she decides to return it and get a new one. Only customer service doesn't smile upon a seventeen year old returning a shotgun with the wrong reciept, and soon Ellery finds herself being escorted from the mall by a security guard. A security guard who happens to go to her school and is someone she knows. Colter Sawyer, jock and seemingly perfect individual, quickly discovers Ellery's secret and is determined to change her mind. Colter's got secrets of his own and is one of the few people able to understand Ellery's pain. He's refusing to give up on her even as Ellery is determined to fight her attraction to Colter and find another way to die. As Colter tries to convince Ellery to live, will another tragedy push her over the edge? Or will Ellery finally discover a reason to live and be able to move on from her pain?

Having devoured Teach Me To Forget, I have absolutely no hesitation in giving it the perfect five star rating I've given it. None at all. Erica M. Chapman details an incredibly written and powerful novel with this story. Teach Me To Forget deals with strong, important themes whilst managing to mix romance, friendship and sarcasm into a story that follows a strappy, strong voiced heroine. There's the perfect blend of entertainment and thought provoking situations blended together with lyrical writing and wonderful dialogue.

It's impossible to read this tale and not be completely won over by Ellery. She's guilt ridden and in pain but very determined. And she actually manages to instill a lot of logic into her attempts at suicide. Through Ellery, Erica M. Chapman highlights how easily it is to miss someone's pain and how it's often those who keep their intentions a secret that are actually the most serious about ending their lives. Throughout Teach Me To Forget, you will feel Ellery's pain, feel her uncertainly and feel her confusion as Colter begins to make her question her intensions.

There's no quick fix in this novel as Elley's pain is real and unbending, but Elley's chance at salvation does come in the form of Colter Sawyer who quickly makes it his mission to watch over Ellery and try to convince her to live. There was nothing about Colter I didn't like--he really was a beautiful soul who managed to be cheeky, honest and swoon-worthy all at the same time. As with Ellery, Colter felt real and I really did love him as a person as well as a love interest.

The relationship between Ellery and Colter is a big part of Teach Me To Forget, as what starts out as Colter trying to save Ellery from herself soon turns into an endearing, honest and emotional romance. There's so much authenticity to Ellery and Colter as a couple. Chapman manages to wonderfully capture the anticipation, uncertainty and awkwardness that comes as two people start to fall in love and begin to blossom, even as one remains determined to fight their feelings for as long as possible. There's a wonderful chemistry between Ellery and Colter and I thought they were such an adorable couple.

There's so much about Teach Me To Forget to love. Ellery has a snarky and sarcastic personality that bleeds through the story while Chapman instills a lot of heart wrenching emotion within the story alongside some fabulous minor characters who give the story depth and life.

Sensationally written, featuring a witty dialogue and a romance that feels real, Teach Me To Forget is a beautiful novel that I doubt my review will do justice for but can't recommend regardless! One of my favourite books this year!