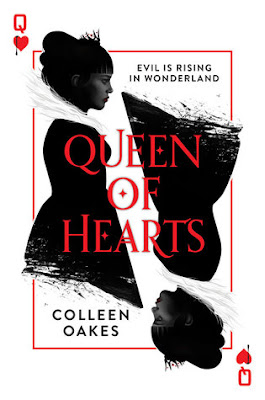 As Princess of Wonderland Palace and the future Queen of Hearts, Dinah’s days are an endless monotony of tea, tarts, and a stream of vicious humiliations at the hands of her father, the King of Hearts. The only highlight of her days is visiting Wardley, her childhood best friend, the future Knave of Hearts — and the love of her life.

When an enchanting stranger arrives at the Palace, Dinah watches as everything she’s ever wanted threatens to crumble. As her coronation date approaches, a series of suspicious and bloody events suggests that something sinister stirs in the whimsical halls of Wonderland. It’s up to Dinah to unravel the mysteries that lurk both inside and under the Palace before she loses her own head to a clever and faceless foe.

Part epic fantasy, part twisted fairy tale, this dazzling saga will have readers shivering as Dinahs furious nature sweeps Wonderland up in the maelstrom of her wrath.

Familiar characters such as Cheshire, the White Rabbit, and the Mad Hatter make their appearance, enchanting readers with this new, dark take on Alice’s Adventures in Wonderland.

Queen of Hearts is the first novel in Colleen Oaks Queen of Hearts Saga and introduces readers to a unique and often overlooked branch of the Alice in Wonderland classic tale with this intriguing story.

As the Princess of Wonderland, seventeen year old Dinah’s days are spent studying and preparing for the day she will become Queen of Hearts and rule alongside her father, the current King of Hearts. Monotonous as they are, Dinah’s days are only broken up by teas, crochet and stolen moments with her best friend Wardley, the future Knave of Hearts. Yet, as her coronation fast approaches, strange things are happening in Wonderland. And as secret messages, mysterious arrivals and odd occurrences plague Dinah’s life, Dinah sets out to determine exactly what is going on, even as the danger looms larger than ever before….

I’ll be honest, Queen of Hearts wasn’t an easy novel for me to read. It started out slow and wasn’t overly fast paced, but for the small issues I seemed to have with it, I did enjoy the story. Author Colleen Oakes explores an often overlooked aspect of Alice in Wonderland; the Queen of Hearts. Everyone knows, or is at least marginally familiar with Alice’s tale, but what about the woman known for cutting of heads, the infamous Queen of Hearts? How did she become the woman who ruled Wonderland with an iron will and feared reputation?

Well, Queen of Hearts finally explores that avenue, following future Queen of Hearts Dinah when she was only a Princess of Wonderland. In the beginning Dinah comes across as a really spoilt, selfish individual, but as the novel progresses it becomes clear that she does feel and care about the people in her life. Treated terribly by her father, I actually felt really sorry for her. There was something that kept me from connecting with Dinah fully and I didn't feel much towards her feelings for Wardly, but I did feel like Dinah has potential as a main character.

Colleen Oaks weaves a very intricate tale of deception and betrayal in Queen of Hearts. It’s difficult to ascertain just who is friend and who is foe as the motives of certain individuals come into question. I loved that Oaks went out of her way to incorporate all the different aspects of the original tale into her story; the Cheshire “cat”, the Mad Hatter, the Knave of Hearts etc…..it gives a fresh and clever feel to story while embracing the Alice in Wonderland classic.

Overall, I do think Queen of Hearts is worth a read and I enjoyed the story the more I read. Queen of Hearts ends in a manner that left me keen to see what happens to Dinah next and I will be looking to read the sequel when I have the chance to see what Colleen Oaks has planned next to this vivid Wonderland world.

Source: Sent for review by publisher (Thank you Holly!)
Publisher: Harper Collins Australia
Format: Paperback
Australian RRP: $19.99
Release Date: May 1st 2016
Purchase: Bookworld | Booktopia | The Book Depository | Amazon
Final Thoughts: Queen of Hearts didn't blow me away, but it ended well and I do plan on reading the second book if I have a chance.