Book Shelf: Never Too Far (Too Far #2) by Abbi Glines 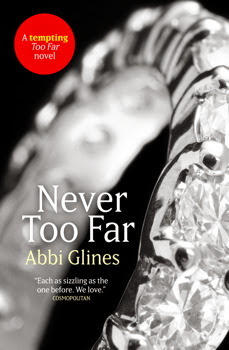 He had held a secret that destroyed her world.

Everything she had known was no longer true.

Blaire couldn’t stop loving him but she knew she could never forgive him.
Now, she was back home and learning to live again. Moving on with life… until something happened to send her world spinning once again.
What do you do when the one person you can never trust again is the one that you need to trust so desperately?

You lie, hide, avoid, and pray that your sins never find you out.

Never Too Far is the second installment in Abbi Glines Too Far series and continues Blaire and Rush's riveting, and often emotionally traumatic journey in this fantastic sequel in the series.

Unlike the first book in this series, Never Too Far is actually told in dual POV, with both Blaire and Rush having a voice in this installment in the series. Whilst I enjoyed the way Glines wrote the first book, the ability to read through the eyes of both main characters always enhances the reading experience; something quite evident in Never Too Far. If ever people doubted Rush's sincerity and depth of his love for Blaire, this book allowed him to share his voice as never before and put those doubts to rest.

All the characters I loved, and loathed, in the first book are back, both to help and hinder. I was thrilled to see Blaire experience strong and ongoing friendships with both Bethy and Woods throughout Never Too Far. Bethy, despite her saucy nature, or perhaps even because of it, continues to be a true friend to Blaire, supporting her and standing by her in her current situation. Woods, even after his failed attempt to woo Blaire proved to be a sense of strength for Blaire and continues to win me over with the good and honorable guy he truly is.

Never Too Far is a very emotionally driven rollar-coaster ride for Blaire and Rush. An unexpected development in their situation forces them to face their issues and there's never a lack of uncertainty, pain and strife as the two must decide whether they're going to be together or not. Even though at times admittedly I've had my issues with these characters, there's something so undeniably addictive about their story. No matter what some people may think, Glines writes it well.

Blaire and Rush are in no way perfect. Blaire suffers from a mountain load of insecurities and her inability to believe she's good enough continues to hinder her relationship with Rush. She's young, insecure and sometimes (I believe) too forgiving, but she's also incredibly strong. Her ability to pick herself up time and time again after everything she's been through and keep going is admirable. So is her desire to do it herself. Here is a girl not afraid of hard work if it means surviving and throughout each book Blaire has displayed how far she's willing to go to take care of herself if she has to.

Rush on the other hand, struggles to balance his relationship and feelings for Blaire with his relationship with his family and makes more mistakes at times than it seems a person should be allowed to. He's rash and possessive and at times unthinking, but as he stumbles through his relationship with Blaire it's so very evident that he wants to be better. He isn't intentionally cruel or unthinking, he's just never known how to be any other way. He's learning. Throughout this series Rush is learning to be a better man; to become the supportive and attentive person Blaire needs and it's hard to fault him when you see him. try so hard

Both Blaire and Rush are human. And Glines doesn't shy away from this. Rush and Blaire have a lot of issues to face. The trust they had was shattered at the end of the last book and during the sizzling story in Never Too Far, they need to rebuild their relationship. As always the sex scenes were hot and with Blaire hormones in over drive, the connection between Blaire and Rush was never lacking, even as they stumbled over rebuilding their relationship.

Never Too Far was fun, sexy and very, very emotional. There's pain, laughter and love to be found within it's pages and with more revelations coming to light towards the end, Glines has set up the storyline for the final book very nicely. Never Too Far ends on an incredibly sweet moment and has me ready to pick up the third, and final, book pronto!

Source: Sent for review by Simon & Schuster Australia (Thank you Anabel!)
Format: Paperback
Buy it: Bookworld | The Nile | The Book Depository | Amazon
My Recommendation: NA fans you'll want to read!
Cover: I love the stunning simplicity of our Aussie covers!
Will I read sequel/continue with series: Absolutely!