Book Shelf: The Beautiful and the Cursed (The Dispossessed #1) by Page Morgan 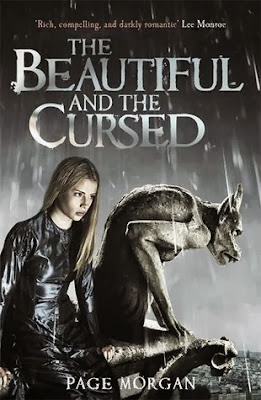 Ingrid Waverley is a young woman to be reckoned with. Faced with her brother's mysterious disappearance after an abrupt move to Paris, she is determined to discover what has happened to him. Soon she and her sister Gabriella are drawn into a Parisian underworld more terrifying than they could ever have imagined, but watching over them are two impossible (and impossibly handsome) young men. Luc is a 'Dispossessed', an ancient gargoyle whose sworn duty it is to protect the humans who inhabit his abbey. Nolan has secrets of his own too. He is a member of the Alliance - a shadowy group dedicated to keeping Paris safe from the demonic forces that threaten to destroy it.

Secrets, danger and hidden powers stalk the girls in this beautifully imagined paranormal romance that will keep readers gripped from beginning to end - and one thing is for sure - you'll never look at a gargoyle in the same way again...

The Beautiful And The Cursed is beautiful and darkly seductive, lending imaginable beauty to a mysterious and thrilling read. Full of tantalizing romance, mythical creatures and powerful characters this truly is a compelling story!

In all honesty, heading into The Beautiful and the Cursed I really wasn't expecting that much. It wasn't as though I wasn't expecting to enjoy the story; I simply wasn't prepared to discover how much this gothic stunner would steal my heart. I seriously loved this book!

Even in the opening chapters the compelling characters and magically described setting promised untold adventure. The story was incredibly well written; the writing is descriptive and lyrical. Set amongst a dark Parisian backdrop, the gothic poise and old worldly feel of the story is undeniable; pulling you straight into another time and place.

The characters in this story were brilliant. All so well written and well rounded, each gave so much to the story and considering this is the first book in the series, the connections that have begun to develop are already amazing to read about. All the characters complimented each other so well and the intricate relationships between them allows for a lot of interesting romantic possibilities in the middle of the danger that is gripping Paris throughout the story.

Told in various POV's The Beautiful And The Cursed focus's mainly on sisters Ingrid and Gabriella "Gabby" Waverly, with Ingrid being the main protagonist. I liked Ingrid I really did--there's something undeniably likable about her, but you know who stole the show for me? Gabby! This girl has some serious fire and some serious attitude. She may be young, but she shows oh, so much promise.

With the two sisters desperate to find their brother Grayson, author Page Morgan writes some thrilling romantic connections in The Beautiful And The Cursed, for both Ingrid and Gabby. Ingrid finds herself in an unexpected situation as she bonds with protector and guardian gargoyle Luc; a man she can never be with, as well as Vander; the kind and mysterious scholar who also happens to be able to kick some serious butt. Vander is a serious sweetie and definitely more than he seems, but Luc and Ingrid have a tangible relationship from the beginning that just wins me over--I'll definitely be vying for them!

Gabby on the other hand sets the pages of the story on fire with the intense and electric connection she forms with Scottish rogue and Alliance member Nolan. From the very moment these two meet they do nothing but fight and bicker and as the tension escalates, begin to prove that age is no barrier as they both make it evident they're as mad for one another as the other. Eeep! I LOVE Gabby and Nolan--their relationship is soooo much fun to read about and I cannot wait to see it develop further!

Page Morgan blends dark romance with mystery and addictive adventure in The Beautiful And The Cursed. The intriguing storyline is full of excitement and has plenty of twists and turns to keep you entertained. The story progresses well and I was completely absorbed as the motivations behind some characters were discovered and betrayals were revealed.

The characters are put through the wringer at times, but things just get more and more dangerous as the story progresses; leaving me as the reader more drawn into the tale. The Beautiful And The Cursed is an unexpectedly compelling read, whose rich and gothic storyline has me eager to get my hands on the second book as soon as possible!

Source: Sent for review by Hot Key Books (Thank you Sandra!)
Format: Paperback
Buy it: Bookworld | The Nile | The Book Depository | Amazon
My Recommendation: Love a good gothic tale or characters with plenty of chemistry? If yes, then this book is for you!
Cover: I understand what they were trying to do with it, but I don't feel it does the book justice!
Will I read sequel/continue with series: Absolutely!