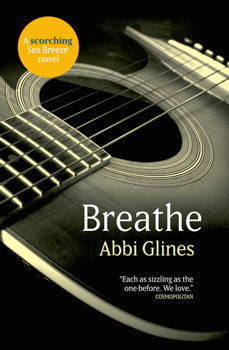 In the shore town of Sea Breeze, Sadie discovers that fame is nothing in the face of passion. A steamy read from bestselling author Abbi Glines.

Sadie White’s summer job is at the beach, but she won’t be working as a lifeguard. Since her mom is pregnant and refuses to work, Sadie will be taking over as a domestic servant for a wealthy family on a nearby island.

When the family arrives at their summer getaway, Sadie is surprised to learn that the owner of the house is Jax Stone, one of the hottest teen rockers in the world. If Sadie were normal—if she hadn’t spent her life raising her mother and taking care of the house—maybe she’d be excited about working for a rock star. But she’s not.

Even though Sadie isn’t impressed by Jax’s fame, he is drawn to her. Everything about Sadie fascinates Jax, but he fights his attraction: Relationships never work in his world, and as badly as he wants Sadie, he believes she deserves more. Yet as the summer stretches on, Jax’s passion leaves him breathless—and Sadie feels like the only source of oxygen.

Can their love overcome the disparity in their lifestyles? One breath at a time, they’re going to find out.....

So. I'm an Abbi Glines fan. Plain and simple. What can I say? The woman knows how to write! And she certainly knows how to keep me entranced by her stories. I may have broke with tradition, reading the 2nd book in this series Because of Low first, but in no way do I feel it detracted from Breathe as each book in this series focus's on a new set of main characters in a brand new story!

Breathe tells the story of Sadie White, a sweet girl from the small costal town of Sea Breeze who has a mess of a mother and a tough home life and Jax Stone, the lonely and fed-up rock star who escapes to Sea Breeze every year only to meet the one girl who manages to see him like no other and who manages to worm her way into his heart.

In all honesty, I found Breathe to be a really enjoyable read. Abbi Gline's writing is simple, I admit that, but it flows perfectly and she manages to write great characters into simple stories that are a hell of a lot of fun to read. The storylines can be simple at times, but they're none-the-less entirely captivating and it was quite impossible for me to put Breathe down. I wanted to stay in Sadie and Jax's world.

Sadie was a real sweetie. I liked this girl with her big heart and her attentive attitude. Sadie took care of her mother Jessica and was so kind to everyone she knew. I liked how Glines wrote every part of Sadie, from her ability to take care of a mother who I might say was a right mess and who's actions were discugsting at times to her sweet friendship's that developed between her and those who worked in the Stone household.

What girl has never dreamed of a rockstar falling for them? I know I certainly have in the past and Glines makes our every dream a reality in the form of Sadie when she becomes the object of Jax Stone's affections. Oh, Jax! What a babe! Honestly, Jax Stone was a really awesome male lead. Despite his rock star status, Jax really was a good guy. He had a good heart and his actions were incredibly sweet. There was never a moment where I didn't like Jax. From beginning to end of Breathe, Jax Stone was the perfect match for Sadie.

Chemistry wise Jax and Sadie had it from the beginning. Glines writes their relationship both sweet and sizzling at the same time with the anticipation building for them to really be together from the very beginning. My only issue with this book was that I felt Sadie and Jax fell in love with each other way too soon, especially on Sadie's part. Don't get me wrong, Glines builds up to it, with moments spent together, but I feel like the whole "love of my life" thing happened a tad too quickly for me to believe. If it had of only taken a little bit longer then I may have found it more believable. And yet, I still felt Sadie and Jax's connection and attraction to one another, I just didn't out right accept their "love" as I my otherwise would.

Featuring perfect character relationships and even characters from the other books (hello Marcus!), Breathe was/is a great start to this series and is the perfect book of Abbi's to pick up if you're considering reading her books!

Source: Sent for review by Simon & Schuster (Thank you Anabel)
Format: Paperback
Buy it: Bookworld | The Nile | The Book Depository | Amazon
My Recommendation: NA fans will love this one!
Cover: Simple, but perfect
Will I read sequel/continue with series: YES!