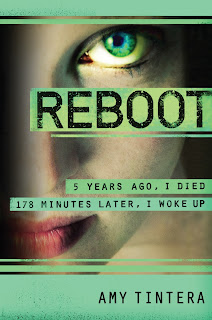 Five years ago, Wren Connolly was shot three times in the chest. After 178 minutes she came back as a Reboot: stronger, faster, able to heal, and less emotional. The longer Reboots are dead, the less human they are when they return. Wren 178 is the deadliest Reboot in the Republic of Texas. Now seventeen years old, she serves as a soldier for HARC (Human Advancement and Repopulation Corporation).

Wren’s favorite part of the job is training new Reboots, but her latest newbie is the worst she’s ever seen. As a 22, Callum Reyes is practically human. His reflexes are too slow, he’s always asking questions, and his ever-present smile is freaking her out. Yet there’s something about him she can’t ignore. When Callum refuses to follow an order, Wren is given one last chance to get him in line—or she’ll have to eliminate him. Wren has never disobeyed before and knows if she does, she’ll be eliminated, too. But she has also never felt as alive as she does around Callum.

Reboot, Amy Tinera's debut novel is an addictive dystopian read that will captivate you with it's fast paced plot, delicious action and perfect romance and will have you eagerly flipping pages, completely lost in the story!

I have to say I was very impressed with Reboot. Very, very impressed. Not only did it meet all the expectations I had going into the book, it by far exceeded them! I'll definitely be adding this book to my favorite dystopian reads of all time--up with the likes of The Hunger Games and Divergent! Reboot is just that good!

In Reboot, debut author Amy Tinera introduces us to a world where young people often become infected with a disease that causes them to die and then "re-boot" some time later, waking up altered and with new abilities they didn't have before. Enhanced speed, healing abilities and the changing of their emotions makes them very different than they were before. Not every person is guaranteed to re-boot after death, nor is it something that is looked forward to.

In a world so devastated by disease and poverty, the Reboots, as they are known, are segregated and locked up, trained to be soldiers by the government and medical facilities that run the US and the state of Texas where this book takes place. This is a really harsh and sad society and it's impossible not to become lost in the hardened world that it is. The normal humans that inhabit it as very easily living their lives as normal, but the way that Amy Tinera details this world, I couldn't help but get chills over the prospect of living like this.

With flawless writing, Amy Tintera introduces us to some very awesome characters in Reboot. There's a great dynamic to be read about with the training that takes place throughout Reboot as well as a very interesting state of mind the Reboots have. Considering that the longer you stay dead, the more altered you are when you finally wake, I really enjoyed seeing the two different types of Reboots-the Over Sixties and Under Sixties. Those over were more callous and stronger, while those Under were softer, more human. This was really clever on Tintera's part as an author--I can without a doubt say this was something I had never seen before and I loved that!

Speaking of characters, Wren Connelly was just plain out amazing! Honestly, I love this girl. Amy Tintera has done a fantastic job creating a main character like Wren. As a 178, Wren is the deadliest Reboot ever, having been dead the longest. Considering the longer dead the stronger the Reboot, logic states that Wren should be the strongest and the fastest and the one with the least emotions and in that she is.....but she also isn't. Tintera gives Wren real personality in this book. In essence, she's everything she's expected to be as a Reboot--unemotional, controlled, a killing machine, but all it takes is one lower numbered Reboot to spark something in Wren that allows her to suddenly feel emotions she hadn't felt in a long time and quite possibly has never before. This happens and suddenly you can't help but love Wren even more as she begins to care and actually experience the small things in life that matter like friendship and humor. And this is what Wren experiences when she meets Callum, 22. This is what makes her want to change and fight for something more.

As far as I'm concerned, Callum was just perfect in my eyes! It was so refreshing to find a character like him in this book. I adored the fact that Amy Tintera didn't go for the typical, in control, alpha male lead we're so used to seeing, in Reboot. Instead, Callum was a softer kind of character, a gentler one. He was the inexperienced one, the weak one, the one not sure if he could be a killer and yet he was still such a powerful character none-the-less. His quiet strength and his never ending smile and good nature in the midst of it all was such a read thing to read about--it really enhanced some great parts of the book.

I could never speak about Reboot and not mention the fantastic relationship that develops between Wren and Callum. From trainer and trainee, to friend and friend to something so much more, these two had such a great dynamic. They really brought out the best in each other and I think Tintera balanced out both of their personalities through each other. Considering they had great chemistry and trusted one another, their romance was really sweet and I was addicted to it from the very moment they met; knowing something had to happen there at some point.

With so many fantastic and exciting moments during Reboot, I really have no idea where Amy Tintera plans to take the series next. Featuring a not quite cliffhanger ending that has me eager for the next book regardless and desperate for more of these characters, I highly recommend adding Reboot to your TBR pile--this is a brilliant addition to the dystopian genre!

Source: Sent for review by Allen & Unwin (Thank you Lara!!)
Format: Paperback
Buy it: Booktopia | The Nile | The Book Depository | Amazon
My Recommendation: Looking for the next great dystopian? Well stop looking--here it is!
Cover: I love our Aussie cover, I really do. The colors, the look--it's perfect.
Will I read sequel/continue with series: YES!


Love the sound of Reboot? Stop back in tomorrow for the Australian Blog Tour featuring an interview and giveaway with Amy Tintera!